An IAC victory caps a magical trifecta week for the Rogers family. 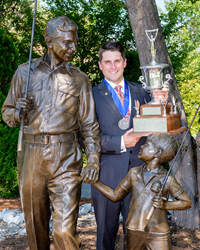 "Watching my hero get inducted into the NAA Hall of Fame on Thursday made the week for my family. Then, winning the contest the next day fulfilled a lifelong dream and a ten year pursuit,” said Dustin.

Rogers was born and raised in the real estate and auction business. Starting as a child, he began helping the family business by pushing boxes at estate auctions. After high school he attended the Mendenhall School of Auctioneering, where he earned the title “Best All Around”. In 1992, he attended his first National Auctioneer Association convention. In 2006, he won the AANC Rookie Bid Calling competition, and in 2008, was named Grand Champion Auctioneer in the AANC State Bid Calling Contest.

Specializing in selling heavy equipment and machinery, along with fundraising, real estate, automobile and livestock auctions, Rogers has worked as a contract auctioneer for some of the world’s largest auctioneers of equipment. He has conducted auctions across the nation and seven foreign countries in his respectable career. He is married to his high school sweetheart, Britni. They reside on their family farm with their two children, Kenedi Blaire (9) and Hudson (6).

93 contestants, 73 men and 20 women, competed for the championship to hold the title as one of the best auction professionals in the world. There were three rounds; a preliminary bid-calling round, an interview round and a final round of bid-calling that included the top fifteen men and seven women. Rogers was presented with a $5,000 cash reward, trophy and a championship ring for his accomplishment. Making the win even more meaningful to Rogers is the fact that he has placed in the top 3 every year since 2011.

The 2017 win capped a magical trifecta for the Rogers family. The first generation, Grandfather Bracky Rogers celebrated his 82nd birthday on Wednesday. His father, Mark was inducted into the NAA Hall of Fame in an emotional ceremony on Thursday. Third generation auctioneer, Dustin won the IAC Men’s Division on Friday.

“Watching my hero get inducted into the NAA Hall of Fame on Thursday made the week for my family. Then, winning the contest the next day fulfilled a lifelong dream and a ten year pursuit,” said Dustin.

The IAC, which was streamed live throughout the day on Facebook, YouTube and Twitter, was conducted as part of the NAA’s 68th Annual International Auctioneers Conference and Show, which took place in Columbus this past week. IAC contestants must be 18 years of age or older, a current NAA member, and registered for Conference and Show.