Amberdata Raises $2 Million in Seed Financing and Gears for Launch 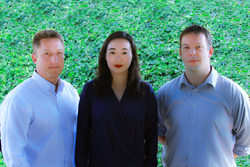 “We intend to provide everything that an enterprise needs to seamlessly and securely integrate blockchain infrastructure and applications into its business”, said Shawn Douglass, co-founder and CEO of Amberdata.

Amberdata, the essential provider for operationalizing public and private blockchain, today announced that it has closed a $2 million round of venture financing from top-tier venture capital firm HWVP. Amberdata plans to use the funds to accelerate the launch of its platform, offering instrumentation for blockchain infrastructure, application, and transactions.

“The explosion of innovation around distributed ledgers and decentralized computing is a global paradigm shift transforming industries,” said Shawn Douglass, co-founder and CEO of Amberdata. “We intend to provide everything that an enterprise needs to seamlessly and securely integrate blockchain infrastructure and applications into its business”.

Businesses are using smart contracts and decentralized applications to codify workflow into blockchains. As they tackle the complexities associated with integrating blockchain into their existing processes, Amberdata's actionable insights, search and alerts allow businesses to monitor and support blockchain operations. Amberdata fills a gap in today’s software ecosystem and empowers developers and operators by putting these tools directly in their hands.

Lars Leckie, general partner of HWVP, joining Amberdata’s board of directors, added: “Amberdata addresses a critical missing piece in the core blockchain technology stack that will facilitate broad adoption. The company’s founding team are seasoned enterprise veterans with a track record of building for and operating at scale. We are proud to partner with the team solving crucial problems in the blockchain world and enabling new opportunities in the market.”

About HWVP
HWVP, a leading venture capital firm in the Bay Area focused exclusively on software investments, manages over $1 billion in cumulative capital. Since the firm’s inception in 1989, it has launched over 100 new software companies. For more information, visit http://www.hwvp.com.