Famed Military Technical Advisor, Actor, and Author will be honored at the 12th Annual Beaufort International Film Festival for Career Achievement in Film and Television 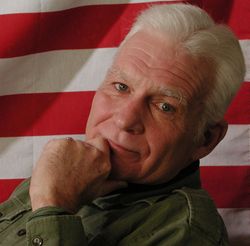 The Beaufort Film Society is pleased to announce that Dale Dye will be presented the inaugural Pat Conroy Lifetime Achievement Award at the 12th annual Beaufort International Film Festival. The festival dates are February 21-25, 2018 with the Red Carpet Reception and Awards Gala taking place on Sunday, February 25th at the University of South Carolina, Beaufort, Center for the Arts.

“ If you look at his body of work in the film industry over the past three decades, read the stories from the directors he has worked with like Robert Zemeckis, Steven Spielberg, and Oliver Stone, you’ll see why we’re so very honored to present the first Pat Conroy Lifetime Achievement Award to Hollywood Legend Dale Dye,” stated Beaufort Film Society President Ron Tucker.

The award is named for Best Selling Author and Academy Award nominated Screenwriter Pat Conroy who was a long time resident of Beaufort, SC before his death of pancreatic cancer in March 2016. “It is with the blessing of the Conroy family that we have named our most prestigious honor in the name of Pat Conroy. Beaufort’s long film history began with Pat when his novel The Great Santini was made into a feature film and shot right here in Beaufort,” stated Rebecca Tucker, Co-Director of the Beaufort International Film Festival. Dale Dye was the Military Advisor on three productions shot in the Beaufort area - Forrest Gump, Rules of Engagement, and the television pilot Semper Fi.

Dale Dye is one of the most recognized and respected players in the movie and TV industry. His work has had a huge effect both behind and before the cameras, particularly in projects with a military theme. He has been credited with single-handedly changing the way Hollywood makes war movies.

The work of Dale Dye in Hollywood has ranged from technical adviser to acting roles in war movies, many of which earned acclaim such as “Platoon,” “Casualties of War,” “Saving Private Ryan” and “Band of Brothers” and he hosted History Channel’s documentary series, “The Conquerors.”

Dale is a native of Southeast Missouri. In 1962, he graduated as a cadet officer from Missouri Military Academy with hopes of attending the U.S. Naval Academy. When that failed and there was no money available for college, he enlisted in the United States Marine Corps and reported to boot camp in January 1964. He served in Vietnam in 1965 and 1967 through 1970 surviving 31 major combat operations.

He emerged from Southeast Asia highly decorated including the Bronze Star with V for Valor and three Purple Hearts for wounds suffered in combat. He spent 13 years as an enlisted Marine, rising to the rank of Master Sergeant before he was chosen to attend Officer Candidate School. Appointed a Warrant Officer in 1976, he later converted his commission and was a Captain when he was sent to Beirut with the Multinational Peacekeeping Force in 1982-83. He is a graduate of the University of Maryland with a Major in English.

As a lifelong movie buff with a special penchant for war movies, Dale decided to head for Hollywood when he retired from active duty in 1984. His idea was to see if he could help make war movies more realistic and improve screen portrayals of military men and women. He founded Warriors, Inc., a business with the stated agenda of shining some long-overdue positive light on the people who serve and sacrifice in American military uniform past, present and future. Over the years, Dale built his business into the premier military consultancy to motion pictures and television employing his well- respected, rugged and realistic method of fully immersing actors in a boot camp-style training program before the cameras roll. To date his firm has worked on more than fifty movies and TV shows including several Academy Award and Emmy winning productions. To further his agenda, Dale also founded Warriors Publishing Group which publishes a premium slate of military-themed books written by veteran authors.

Dale Dye is a published novelist, screenwriter and director as well as a consummate character actor with critically-acclaimed appearances in many films and television productions.

He is currently in pre-production with what will be his feature film directorial debut in the World War II themed film No Better Place to Die.

The Pat Conroy Lifetime Achievement Award is sponsored by Leslie and Landon Thorne.