One of the largest flag football tournaments in the world is just around the corner, set to begin in Orlando, Florida this Memorial Day! The Flag Football World Championship Tour, organizers of Battle Orlando, have announced a partnership with military charities HCC and 22KILL to bring awareness to their cause through the unique event - Blaster Battle! 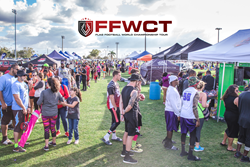 Blaster Battle will allow HCC to partner with a great organization who believes in our mission. Plus, we’ll be able to spread our message of veteran empowerment… and have a great time doing it!

In addition to a weekend filled with flag football, the founders of Flag Football World Championship Tour (FFWCT) are thrilled to bring Blaster Battle to Orlando as a portion of the festivities during the Memorial Day weekend event – Battle Orlando.

Battle Orlando is a flag football tournament with brackets for various age groups and genders. The players will spend the weekend battling for an impressive $30,000 purse. Partial proceeds from the event is being donated to Honor Courage Commitment, Inc. (HCC) and 22KILL – two organizations dedicated to creating a better world for our veterans.

Additionally, participants, along with their family, friends, and other attendees, can join in on the fun at Blaster Battle. Blaster Battle is a massive toy pistol fight, set to take place at Simmers Young park in Winter Haven, Florida. All age and skill levels are invited to partake in the event, but those under the age of 18 will be required to turn in a signed waver from their parent or guardian before taking the field.

Currently, the record for the largest toy pistol fight is 2,289 participants. All other games will come to a halt during Blaster Battle, as the FFWCT team and the attendees try to break that record.

Travis Burnett, Co-Founder of FFWCT said of the record-breaking attempt and the event as a whole, “As interest in FFWCT has grown, our Memorial Weekend event, Battle Orlando, began developing into one of the largest adult/youth flag football events in the country. We wanted to leverage our popularity to give back to a worthy cause. We set out to create a sub-event – and Blaster Battle was born. Blaster Battle allows us to financially support Honor Courage Commitment, Inc. and 22KILL, and will help us to spread the word about their cause.”

Battle Orlando has released exclusive T-shirts for the event, which can be pre-purchased for $20. Fifty-percent of the proceeds will be given to the charity honoree – HCC, and each pre-purchase includes a free Nerf gun and ticket to partake in Blaster Battle. T-shirts and tickets can also be secured for their regular price of $20 each at the tournament from any FFWCT booth.

Cliff Sosamon, Executive Director of HCC detailed his excitement regarding the event, “Honor Courage Commitment, Inc. is excited to partner with FFWCT on this Memorial Day weekend for Blaster Battle. We strive every day to empower veterans in finding their next mission in life; wither through entrepreneurship or in their next career. The first step in accomplishing this task is for them to establish their own unique sense of purpose. Blaster Battle will allow HCC to partner with a great organization who believes in our mission. Plus, we’ll be able to spread our message of veteran empowerment… and have a great time doing it!”

For more information about Blaster Battle, Battle Orlando, or FFWCT, contact Travis Burnett at Phone or Email, or visit the FFWCT website.