Acclaimed quarterly to publish never-before-seen journal by one of America’s greatest writers at the outset of her vocation. 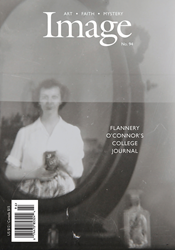 With her trademark wit already in evidence, the eighteen-year-old O’Connor entitled her college journal 'Higher Mathematics.'

This November, Image, the influential quarterly journal of art and faith, will become the exclusive publisher of a college journal kept by one of the canonical writers of American literature, Flannery O’Connor.

Written when she was eighteen years old, the journal reveals the same intelligence, humor, and earnest faith one encounters in her letters, as well as the beginnings of the fearsome intellect found in her stories and essays. Her self-deprecating humor, loyalty and love of her family, and her yearning to become a literary success are all in evidence.

Published by arrangement with O’Connor’s estate, the journal is prefaced with a short introduction by Jesuit scholar Mark Bosco, who has recently completed a documentary on her life. The issue will also include several previously unpublished photos, including a self-portrait photo taken through her dresser mirror.

O’Connor lived from 1925 to 1964, almost entirely in the state of Georgia. Her three short story collections and two novels are, taken together, a landmark of twentieth-century American fiction. Her comic, harrowing, and often shockingly violent stories grapple with mystery at the heart of faith without sentimentality or didacticism. She saw herself as a religious writer working in a secular age, and in her own words: “to the hard of hearing you shout, and for the almost blind you draw large and startling figures.”

With her trademark wit already in evidence, the eighteen-year-old O’Connor entitled her college journal “Higher Mathematics.” In it she keeps a daily record of her thoughts, dreams, amusements, and fears for a period of forty days. She is conscious of her powerful literary and intellectual gifts, yet anxious about whether they will come to anything. The entries contain a range of reflections, from a critique of contemporary social science and the dullness of many of her college classes, to close observations of domestic life with her mother and extended family, to the disciplines she is already practicing as a writer. Her longing for sophistication and love is balanced by a deep loyalty and affection for the people near her. She is equal parts satire and warmth. Her characteristic voice is present throughout: alternately mordant, skeptical, spiritual, and funny. A brief excerpt:

Jan. 11, ’44. If I should begin to feel sorry for myself—however erroneously—I could easily move myself to a liquid-eyed condition, and that would be disastrous. I have such an affection for myself. It is second only to the one I have for Regina [her mother]. No one else approaches it. I realize that joyfully just now. If I loved anyone as much or more than myself and he were to leave, I would be too unhappy to want myself to advance; as it is, I look forward to many profitable hours. I have so much to do that it scares me.

Image was founded in 1989 to demonstrate the continued vitality and diversity of contemporary art and literature that engage with the religious traditions of western culture. Now one of the leading literary journals published in English, it is read all over the world—and forms the nexus of a warm and active community.

We believe that the great art that has emerged from these faith traditions is dramatic, not didactic—incarnational, not abstract. And so our focus has been on works of imagination that embody a spiritual struggle, like Jacob wrestling with the angel. In our pages the larger questions of existence intersect with what the poet Albert Goldbarth calls the “greasy doorknobs and salty tearducts” of our everyday lives.

“This magazine fills a real gap in the area of art and religion, and I am convinced that for many people this journal will be a very important source of better understanding of the deep links between art and religion.” —Henri Nouwen

“Image is a realistic, valuable, and extraordinarily interesting magazine. Its writing and artwork is simple, direct, and without pretension—like the best of all American writing. It deserves generous support—and applause.” —Annie Dillard