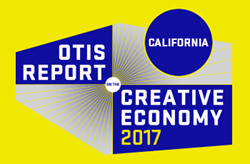 2017 Otis Report on the Creative Economy of California

The findings of the 2017 Otis Report on the Creative Economy were released today by Otis College of Art and Design at the Linwood Dunn Theater in Hollywood.

Bruce W. Ferguson, president of Otis College of Art and Design, welcomed the live and online audience, introducing Cheryl Boone Isaacs, president of the Academy of Motion Picture Arts and Sciences, who provided her thoughts on the creative economy and the entertainment industry. Isaacs’ remarks prefaced a panel discussion on the topic led by report economist Kimberly Ritter-Martinez with Academy members Victoria Alonso and Debra Martin Chase.

Since 2007, Otis College of Art and Design has commissioned the Los Angeles County Economic Development Corporation LAEDC to generate the Otis Report on the Creative Economy, first as a report on the Los Angeles Region and then joined by a statewide report, supported by the California Arts Council. The Otis Reports are invaluable tools to assess the tremendous impact and influence of the area's creative sector on the economy.

Significant findings in the 2017 Otis Report on the Creative Economy of California include:

The 2017 Otis Report on the Creative Economy of the Los Angeles Region and California is available for download online at http://www.otis.edu/otisreport. In addition, key findings of the statewide report will be addressed at an informational legislative hearing in Sacramento, CA on May 24, 2017 organized by the Joint Committee on the Arts.

Media partners include Arts for LA, Arts for Orange County, Californians for the Arts, and LAX Coastal Chamber of Commerce.

ABOUT THE CALIFORNIA ARTS COUNCIL
The mission of the California Arts Council, a state agency, is to advance California through the arts and creativity. The Council is committed to building public will and resources for the arts; fostering accessible arts initiatives that reflect contributions from all of California's diverse populations; serving as a thought leader and champion for the arts; and providing effective and relevant programs and services. http://www.arts.ca.gov.

ABOUT THE LOS ANGELES COUNTY ECONOMIC DEVELOPMENT CORPORATION
The LAEDC provides collaborative economic development leadership to promote a globally competitive, prosperous and growing L.A. County economy to improve the health and wellbeing of our residents and communities and enable those residents to meet their basic human need for a job. We achieve this through objective economic research and analysis, strategic assistance to government and business, and targeted public policy. Our efforts are guided and supported by the expertise and counsel of our business, government and education members and partners.

ABOUT OTIS COLLEGE OF ART AND DESIGN
Established in 1918, Otis College of Art and Design offers undergraduate and graduate degrees in a wide variety of visual and applied arts, media, and design. Core programs in liberal arts, business practices, and community-driven projects support the College’s mission to prepare diverse students to enrich our world through their creativity, skill, and vision. http://www.otis.edu.