Sri Mrinalini Mata, president and spiritual leader of one of the world’s most influential Yoga organizations, Self-Realization Fellowship/Yogoda Satsanga Society of India (SRF/YSS), founded in 1920 by Paramahansa Yogananda (author of Autobiography of a Yogi and widely regarded as the father of Yoga in the West), passed away on August 3, 2017 at one of the society’s residences for nuns in Los Angeles. She was 86 years old. 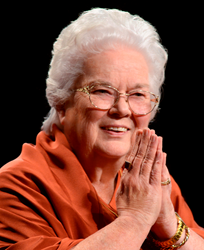 If you give even one hour of the day to God in deep meditation, making sincere effort,” Sri Mrinalini Mata said, “you will see how your life changes.

LOS ANGELES, August 7, 2017 – Sri Mrinalini Mata, president and spiritual leader of one of the world’s most influential Yoga organizations, Self-Realization Fellowship/Yogoda Satsanga Society of India (SRF/YSS), founded in 1920 by Paramahansa Yogananda (author of Autobiography of a Yogi and widely regarded as the father of Yoga in the West), passed away on August 3, 2017 at one of the society’s residences for nuns in Los Angeles. She was 86 years old.

Self-Realization Fellowship teaches the universal essence of all faiths – love for God, and for the Divinity in all beings – and teaches its members to commune daily with God through the system of techniques of yoga meditation brought to the West by Paramahansa Yogananda nearly 100 years ago. Today, SRF/YSS has more than 800 temples, centers, and retreats in more than 60 countries.

Brother Achalananda, vice president of Self-Realization Fellowship, stated, “The inspiration of Sri Mrinalini Mata’s life will leave an enduring imprint on all who have had the good fortune to come in contact with her, either personally or through the spiritual counsel she gave over the years in her writings and recordings. Her service to the work of our founder, Paramahansa Yogananda, has been unique, historic, and irreplaceable. Because of her depth of understanding of the profound and groundbreaking teachings on the yoga science of God-communion he introduced to the world, and her personal example of manifesting them in daily life with purity, humility, compassion, and wisdom, she will continue to be a guiding light for us all.”

Among the tens of thousands of SRF members and friends around the world, Sri Mrinalini Mata – whose name refers to the lotus flower, a symbol of spiritual unfoldment – was deeply regarded as an exemplar of Sri Yogananda’s spiritual principles and ideals, forever encouraging those who sought her counsel to bring the consciousness of God more closely into their lives.

“The one wish in my heart, my deep prayer,” she said, “is to bring to you — and to leave in your hearts, minds, and souls — a deeper longing for God, and a deeper awareness of the reality of His presence, the nearness to each one of us of that Infinite Being.”

An ardent proponent of Yoga philosophy and the science of meditation, Sri Mrinalini Mata, was one of a small group of monastic disciples personally trained by Sri Yogananda to carry on the spiritual and humanitarian work of SRF/YSS, serving his society for more than 70 years. She served as vice president of SRF/YSS from 1966 through 2010, and was editor-in-chief of SRF/YSS publications. In 2011, she became president of the society, following the passing of former president Sri Daya Mata, who held the position from 1955 until her death in November 2010.

Born Merna Brown on May 8, 1931 in Wichita, Kansas, to Vera and William Wesley Brown, Mrinalini Mata spent most of her youth in Southern California. From a very early age she showed a strong interest in religion, regularly attending church with her family. She was drawn to the teachings of Paramahansa Yogananda at the age of 14, shortly after hearing him speak at the SRF Temple in San Diego, California, which her sister and mother had begun attending. When she met Sri Yogananda for the first time in December 1945, he instantly recognized her as one who would play a key role in his work in years to come.

With her parents’ permission, on June 10, 1946, Mrinalini Mata came to live at the SRF Hermitage in Encinitas, California, where she finished her final years of high school and simultaneously began receiving Sri Yogananda’s personal guidance. She entered the SRF monastic community in 1946, at the age of 15. Paramahansaji bestowed on her the final vows of sannyas (renunciation of worldly ties and ambitions) in 1947, and he chose for her the monastic name of “Mrinalini.” A year later her mother also entered Sri Yogananda’s ashram, receiving the name Meera Mata after taking her final vow of sannyasi.

From the very beginning of her life in the ashram, Sri Yogananda spoke openly to other disciples about Mrinalini Mata’s future role. Through daily association during the years that followed, he devoted close attention to the spiritual training of this young nun (she also completed her formal education in the local schools), and personally guided her in the preparation of his manuscripts and talks for publication after his passing, and to oversee their translation into other languages.
She served as editor-in-chief of Self-Realization Fellowship books, lessons, and periodicals for many years, right up until her passing. Sri Yogananda’s critically acclaimed translation and commentary on the Bhagavad Gita, God Talks With Arjuna; his masterful commentaries on the Gospels, The Second Coming of Christ: The Resurrection of the Christ Within You; a multi-volume series of his Collected Talks and Essays, and several other volumes of his poetry and inspirational writings were all prepared and published as a result of her work. Most recently, she completed a major enhancement and enlargement – as per the instructions given to her by Yogananda – of the Self-Realization Fellowship Lessons, a comprehensive home-study series providing instruction in the Kriya Yoga system of meditation that Paramahansa Yogananda introduced worldwide, and his counsel on all aspects of spiritual living.

Sri Mrinalini Mata often spoke on the topic of the science of living. “In this world of dualities and relativities, in which we find so much pain, sorrow, suffering, and turmoil,” she once said, “there is a definite need for a scientific knowledge of how to live. We need a science not just of bringing more material prosperity and more material ‘gadgets’ into our lives, but a science of living. That is what humanity is missing—what is causing all of the problems and troubles in our world today. And that is what…Paramahansa Yogananda brought to the West in his Kriya Yoga teachings.

Over the years, Mrinalini Mata made numerous visits to India to assist Sri Daya Mata in guiding the work of Yogananda’s spiritual society there. She lectured on his teachings to large audiences in principal cities of the subcontinent. Her talks on a variety of subjects, including Kriya Yoga science of meditation and the art of God-centered living , have been published in Self-Realization magazine, in book form, and in audio and video recordings.

Until the very end, she never ceased encouraging people to seek God above all else. "If you give even one hour of the day to God in deep meditation, making sincere effort,” she said, “you will see how your life changes.”

RF/YSS members will be commemorating her life and legacy in memorial services, the venues, dates and times of which will be announced shortly.