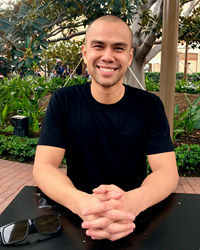 Ayotree.com Co-Founder Khoa Vu: We're committed to showing our continued support for refugees, and to standing with Oxfam America, the UN Refugee Agency, and others."

"We're committed to showing our continued support for refugees, and to standing with Oxfam America, the UN Refugee Agency, and others making a difference in the lives of refugees," comments Ayotree.com Co-Founder Khoa Vu.

"Moses the Freedom Fighter," the free-to-play mobile game making history by donating to Oxfam America's Syria and Refugee Crisis Response Fund, is upping its pledge to help refugees and make the world a better place. Through optional in-game advertising and donations, it's the first mobile game to ever benefit a third-party charity with 100% of proceeds in perpetuity. Today the company behind the landmark game, Ayotree.com, is setting a new benchmark with the goal of raising "10K by World Refugee Day" (June 20, 2017).

The co-founders of Ayotree.com, brothers and former refugees themselves, Chinh and Khoa Vu, created "Moses the Freedom Fighter" to shine a light on today's urgent worldwide refugee crisis. With "Moses the Freedom Fighter" launched in March 2017 to major national and international media acclaim, the brothers are using their game's visibility to raise global donations for Oxfam America's Syria and Refugee Crisis Response Fund, as well as to raise awareness for World Refugee Day and the UNHCR's #WithRefugees petition.

"It's been six years since the Syrian conflict began, and conditions for our world's refugees have only gotten worse," comments Ayotree.com Co-Founder Chinh Vu. "The UN Refugee Agency (UNHCR) notes that today, 1 out of every 113 people is a refugee—the highest percentage since the UNHCR began collecting the data in 1951. And even as these refugees attempt to flee violence and oppression, they find too little sympathy or safety. We created our game to support refugees everywhere, so we're excited to announce this donation campaign seeking to achieve at least $10,000 by World Refugee Day on June 20, 2017."

"We're committed to showing our continued support for refugees, and to standing with Oxfam America, the UN Refugee Agency, and others making a difference in the lives of refugees," adds Ayotree.com Co-Founder Khoa Vu. "We feel it's important to remind them, ‘You are not alone.' And in a world where mobile phones have become crucial tools for truth and social justice everywhere, we believe our mobile game will continue to make history—and a tangible difference. We're also honored to be able to promote the #WithRefugees petition launched by the UN Refugee Agency, to help send a message to governments across the globe that they must at last do the right thing in supporting refugees seeking safety from genocide, danger, and oppression."

World Refugee Day has been observed every year on June 20th since 2001, which marked the 50th anniversary of the 1951 Refugee Convention, and formed the basis for UNHCR's mission to protect and assist refugees everywhere.

The #WithRefugees petition was launched by the UNHCR in 2016, to send a clear message to world governments to work together and do their fair share for refugees. Those who want to join UNHCR, the Vu brothers, and the nearly 1,500,000 others who have added their name and "stand #WithRefugees" can do so at http://www.unhcr.org/refugeeday/petition/. Those interested in supporting Ayotree.com's "10K by World Refugee Day" fundraising campaign can do so at http://www.OxfamAmerica.org/Ayotree.

About "Moses the Freedom Fighter":
"Moses the Freedom Fighter" is free and available now for iOS at iTunes, and for Android via Google Play. Each in-game ad view and donation from the game's Oxfam America fundraising page supports exiles fleeing terror, genocide, and oppression. Interested supporters can donate directly to Oxfam America's Syria and Refugee Crisis Response Fund via http://www.OxfamAmerica.org/Ayotree. The game's efforts for refugees have thus far been covered by NBC News, Los Angeles Business Journal, Pasadena Weekly, KFI AM 640, Nguoi Viet Daily News, Viet Bao Online, and more. Learn more about "Moses the Freedom Fighter" and its inspirations by visiting http://www.FreeMoses.org, or follow on Twitter at @MosesFighter, or on Facebook at http://www.Facebook.com/MosesTheFreedomFighter.

About Oxfam:
Founded in 1942, Oxfam has been working with communities worldwide for over 70 years and is considered one of the world's most active, innovative and respected non-governmental organizations. Today, Oxfam is a global confederation of 20 independent Oxfams, including Oxfam America, working with over 3,200 local partners in over 90 countries.

Oxfam America's efforts also extend to Syria and the surrounding region, where fighting has claimed more than 300,000 lives and triggered a massive exodus. With close to 5 million people fleeing to escape conflict, Oxfam is currently providing lifesaving aid to displaced people, primarily in Lebanon, Jordan, Iraq and Serbia, and is also helping families to meet basic needs as they travel beyond the region to seek safety. To learn more about Oxfam's work in Syria, visit http://www.OxfamAmerica.org/explore/stories/7-ways-you-can-help-refugees-right-now. For more on Oxfam America, visit http://www.OxfamAmerica.org.

About Ayotree.com:
"Moses the Freedom Fighter" is a free educational game from Ayotree.com, a cloud-based language school management system headquartered in Pasadena, California. The company's software helps language schools manage mission-critical tasks that save time and money and is in use throughout Asia, Europe, and North and South America.

The release of "Moses the Freedom Fighter" exemplifies the company's commitment to humanitarian and educational advocacy around the world and is an expression of the founders' dedication—as former refugees themselves—to assisting the millions of others around the world who have experienced oppression, slavery, and racism. The game is currently available in Arabic, Chinese (Simplified and Traditional), English, Filipino, French, German, Hebrew, Indonesian, Italian, Korean, Portuguese, Russian, Spanish, and Vietnamese. Learn more about the company at http://www.Ayotree.com.

For more information on "Moses the Freedom Fighter," its "10K by World Refugee Day" campaign, to review the game, or for additional images or interview opportunities with the game co-founders Chinh and Khoa Vu, please contact publicist Angela Mitchell at news[at]paranoidpr.com or (904) 982-8043.

Ayotree.com's status as a leading language school resource has ensured that "Moses the Freedom Fighter" can speak its message of freedom in many languages.Ayotree Logo

Players of “Moses the Freedom Fighter” can support Oxfam either by viewing optional video ads from the game’s main menu, or by direct donation through the game’s website at www.FreeMoses.org.Oxfam logo