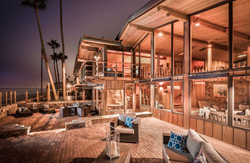 We just added a classic southern California beach home, designed by Sim Bruce Richards. The Del Mar home was designed and built around 1980 and is one of the last ones Richards completed before passing in 1983. It is a true masterpiece by an iconic American architect.

The Modern Architecture + Design Society is returning to southern California to host the 5th annual San Diego Modern Home Tour on Saturday, October 14, 2017. During the self-guided event, tour-goers will get the inside scoop from homeowners on what it’s like to live in a cutting-edge modern home, and learn directly from the on-site architects, builders and designers how they find inspiration for these fascinating residences. The event gives San Diegans a rare opportunity to see the inside of ‘that amazing house on the block…’

Most homes on this year’s tour are new builds or recent renovations, but tour organizers note there is something special in store: “The true architecture fanatics and mid-century lovers are in for a real treat this year: we just added a classic southern California beach home, designed by Sim Bruce Richards. The Del Mar home was designed and built around 1980 and is one of the last ones Richards completed before passing in 1983. It is a true masterpiece by an iconic American architect. It’s also currently for sale.”

The San Diego Modern Home Tour is a featured event in this year’s Archtoberfest celebration, presented by the San Diego Architectural Foundation. The SDAF has been named the tour’s local non-profit beneficiary for the fourth year in a row. Members of the SDAF, along with students from the Design Institute of San Diego and the American Society of Interior Designers (ASID) chapter at San Diego State University, will help staff the event.

Six homes have been confirmed for the 2017 San Diego Modern Home Tour. Participating architects and designers, and featured neighborhoods include:

Participating homes in the Modern Architecture + Design Society’s 2017 San Diego Modern Home Tour will open their doors for viewing from 11AM – 5PM on Saturday, October 14th, in the San Diego, California, area. All are invited to attend. Tickets for the tour are $40. Kids under 10 are FREE when accompanying their parents. For more details, to see a current roster of homes with details and photos, and to buy tickets for the San Diego Modern Home Tour, visit: http://bit.ly/2017sdmod

About the Modern Architecture + Design Society: Based in Austin, Texas, the Modern Architecture + Design Society was founded was founded by James Leasure in 2010 as Modern Home Tours, to introduce modern architecture and living to people across the nation. Through fun and informative self-guided home tours in dozens of cities across the USA and Canada, the group invites people into some of the most exciting examples of modern architecture and design in the nation. With carefully selected architects, neighborhoods and architecture, the MA+DS Home Tours are unlike anything you’ve ever seen. Not only will you learn about the cutting edge of home design while on our tours, but you might even get an idea or two for your next home project!