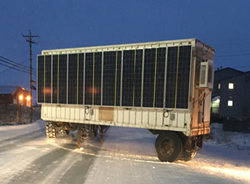 Freezing temperatures are no longer a barrier to solar hot water production.

The 26-foot Solar Hydroponic Trailer manifesting this innovation is located in the enterprising village of Kotzebue, Alaska, the hub of 11 Native Alaskan villages in the state’s Northwest Arctic Borough. Kotzebue is 26 miles north of the Arctic Circle, in the Land of the Midnight Sun. It’s an inspiring time to celebrate the power of solar energy -- and Sun Bandit’s expanded solar applications.

The Solar Hydroponic Trailer is the brainchild of Ingemar Mathiasson and solar thermal veteran Mark Houston, founder and CEO of Anchorage-based The Comforts of Home, LLC. A Passive House Institute (PHIUS)-certified* contractor/energy rater, Houston has been advising clients on energy conservation and alternative energy concepts for 30 years.

“For the first time, we can keep the trailer at 74 degrees in sub-zero temperatures, which allows growing to begin as early as March,” said Houston. “We are collecting solar energy, converting it to heat, and running it through a glycol-based radiant floor and wall panel that provides all of the heat we need to grow a bounty of fresh produce in often-dark, bitter-cold conditions for about nine months of the year.”

The project was inspired when Mathiasson, the energy coordinator representing the Inupiat village of Kotzebue, asked Houston to build a sustainable, cost-effective solution to keep a trailer warm enough to grow fresh vegetables throughout the year.

It’s a tall task, as temperatures in Kotzebue swing from a bitter 40 degrees below zero in winter to a chilly 54 degrees Fahrenheit in the summer. Even during the summer, it’s simply not warm enough to sustain a large community garden. With an average daily temperature of 21.8 degrees Fahrenheit, the best ‘vehicle’ to consistently serve the village with fresh produce was a hydroponic trailer.

The desire to grow fresh vegetables in many remote areas of Alaska isn’t new; Alaskans import up to 95% of their food. Houston says there are companies shipping hydroponic growing containers to Alaska, but they’re overly-sophisticated for the market. They have rotating racks and a bevy of bells and whistles. And they use oil, which can run from $6 to $11 a gallon, depending on the location. Not only is oil expensive for many Alaskans (it has to be refined and then delivered by ship or flown to remote villages), it is finite. It can be a long wait for a delivery truck trekking across the tundra to replenish one’s fuel reservoir – or any household goods for that matter.

Kotzebue had tried using oil to heat their hydroponic trailer, but when it came time to ventilate the space to eliminate water vapor emitted by the plants, the ventilation systems (sometimes as rudimentary as simple fans) rid the trailer of moisture, but took the heat as well, fostering less than ideal growing conditions.

To solve the heat loss problem, Houston introduced a Minotair Air Source Heat Pump (ASHP) to remove unwanted moisture and contaminants and replenish the trailer with fresh outdoor air. Before leaving the trailer, the ASHP heats the stale, damp exhausting air to 150 degrees. The heated air blends with fresh incoming air (whose temperatures can be as low as 40 degrees below zero), warming it to 66 degrees Fahrenheit before returning it to the growing area. This is a critical process, as air colder that that would damage or kill the plants.

When village elders got wind of Sun Bandit, they asked Houston to conceive of a cleaner concept using Sun Bandit as the primary heat source. “They didn’t need anything fancy. They just wanted a place they could reliably grow things. And they wanted to heat it without using oil,” Houston said. “Burning oil (and the cash that goes with it) wasn’t working for them.”

Seven to eight months of the nine-month Solar Hydroponic Trailer growing season will be supported using free solar hot water and radiant heat from stored Sun Bandit energy. Sun Bandit optimizes energy production with an arsenal of built-in back-up options for days when the sun doesn’t shine. In off-grid situations, Sun Bandit solar hybrid water heaters can be configured with a small wind turbine or battery backup to heat water and – as the Kotzebue project illustrates -- support radiant floor heating and hydroponics. Sun Bandit is equipped to use grid-fed electricity when solar is not available as well. View a detailed slide presentation of Houston’s solution by clicking here.

“I’ve been in this business for decades. The Kotzebue project demonstrates that PV-powered Sun Bandit is a much better product to use in colder regions: it’s simple, low-maintenance and it can be installed in one third the time. It’s really the only one that works in the coldest, darkest of climates. And in its solar heating applications, Sun Bandit is four times more efficient than regular electric heat,” Houston said. “At the end of the day --- particularly the longest day of the year -- people don’t want to have to fix things in freezing temperatures. They just want them to work. That is where Sun Bandit shines.”

Kotzebue is the hub of 11 Native Alaskan villages in Alaska's Northwest Arctic Borough, 26 miles north of the Arctic Circle.

The average daily temperature in Kotzebue is 21.8 degrees Fahrenheit.

Sun Bandit harnesses free energy from the sun to heat water to temperatures up to 160 degrees -- even in sub-zero Arctic climates.

When there's no sun, Sun Bandit can be configured with a small wind turbine or battery backup -- or directly connect to the electric grid.

This hydroponic growing area allows the village to grow produce nearly nine months out of the year, despite external temperatures as low as 40 degrees below zero.

The teams at Sun Bandit parent Next Generation Energy have been delivering PV, solar thermal and off-grid solutions for over 30 years.