Beulah Coats’s new book “Child Sexual Abuse: It's Alright to Tell” is a timely book that focuses on the pains and struggles of abuse among children.

Recent release “Child Sexual Abuse: It's Alright to Tell” from Page Publishing author Beulah Coats is a gripping account discussing the trauma experienced by young individuals who have suffered at the hands of abusers. 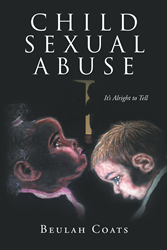 Beulah Coats, a police security officer and a former abused child herself, was born at a time when family matters were inconsequential. She has completed her new book “Child Sexual Abuse: It's Alright to Tell”: a heartrending read as well as a tool that helps in releasing anger, pain, and guilt after experiencing overwhelming circumstances such as sexual assault, or any kind of abuse.

Author Coats writes this book with the intention of inspiring readers, especially the abused, to stand up and let the voices be heard: “Sex isn’t wrong, sexual abuse is. Someone has to stand up and fight for the children. It’s not a choice, it’s a child. So many of our children are being abused and their innocence are taken away at such an early age, three or four years old. Imagine their pain and them wondering what is going on. I know the pain of abuse—I was raped twice—and had to keep my distance from my own kin. When I was older, I know it was wrong but I was too embarrassed and afraid to tell. I thought it was my fault, and not knowing any better, I put it inside of me never to let it come out.”

Published by New York City-based Page Publishing, Beulah Coats’s powerful book is an open letter to both the abusers and the abused alike, that the former have no place among the sound citizens of the society; the latter have the right to defend themselves from the pain and disgust of abuse, and that they have nothing to be afraid or ashamed of. By writing this book, the author also wishes to let the reader’s self-worth grow, paving way for a profound healing.

Readers who wish to experience this cogent work can purchase“Child Sexual Abuse: It's Alright to Tell” at bookstores everywhere, or online at the Apple iTunes store, Amazon, Google Play, Kobo, or Barnes and Noble.