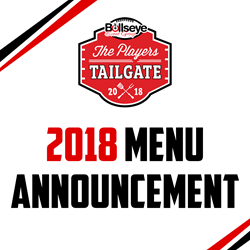 Our events are best described as VIP culinary experiences, and we take great pride in the incredible menu we serve ever year at the Players Tailgate. This year in Minneapolis is no different, and we're excited for our VIP guests to get a taste of this amazing menu this team of chefs has created.

Bullseye Event Group is excited to finally announce the menu for the upcoming 2018 Players Tailgate at Super Bowl 52 in Minneapolis!

"At Bullseye, our events are best described as VIP culinary experiences, and we take great pride in the incredible menu we serve ever year at the Players Tailgate," Bullseye Event Group CEO Kyle Kinnett said. "This year in Minneapolis is no different, and we're excited about the team of chefs and for our VIP guests to get a taste of this amazing menu they've created."

The all-you-can-eat menu for the 2018 Players Tailgate includes:

A delicious array of fresh-flown in poke, gourmet sashimi and sushi, created by 2018 Michelin Star award winner chef Akira Back, who can be seen on Food Network's Iron Chef America, NBC's The Today Show, and Cooking Channel's United Tastes.

New at the 2018 Players Tailgate is the incredible Frank's RedHot Bullseye Brunch Bar, with delicious Sweet Chili chicken and waffles, bacon and egg sandwiches, and breakfast tater tots served with a special blend of Frank's RedHot and French's(R) Tomato Ketchup.

And after all that, head over to the Flavortown Finale dessert station to dive into fresh, hot doughnuts, complete with Minnesota's biggest hot chocolate bar and plenty of assorted desserts.

With over 40 active NFL players and some of the world’s biggest celebrities, Bullseye’s 2018 Players Tailgate, rated the #1 event Super Bowl weekend in Houston in 2017, promises to be the biggest and best pre-game event in Minneapolis ahead of Super Bowl 52 in 2018. America’s favorite chef, Guy Fieri returns, bringing with him his signature recipes and style, and will be joined by the greatest caterer in America, chef Aaron May, and a team of world-renowned celebrity chefs.

In recent years, the Players Tailgate party at the Super Bowl has earned a reputation of hosting some of the biggest celebrities in the industry, including 2016 emcee Erin Andrews, Victoria’s Secret model Adriana Lima, world-renowned tennis pro Caroline Wozniacki, and Super Bowl champions and perennial Pro Bowl players of the past and present.

Bullseye Event Group’s Super Bowl 52 Travel Packages offer fans the chance to cross the NFL’s biggest game off their bucket list, without handling any of the logistics! A VIP experience throughout Super Bowl weekend in Minneapolis includes some of the most luxurious hotels in the Minneapolis area! Super Bowl 52 travel packages also include entrance into a Super Bowl welcome reception (featuring food, premium beverages and a live DJ), a ticket to Super Bowl 52, private motor coach transportation to and from the stadium on game day and entrance into Bullseye’s 2018 Players Tailgate at Super Bowl 52.

Call Bullseye Event Group today at 317-800-5820 for pricing and insider information regarding the Super Bowl 52 Travel Packages and the 2018 Players Tailgate at Super Bowl 52!