New Survey: It’s Getting Even Harder To Fill Jobs 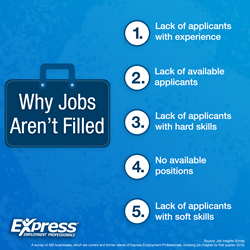 If I have a wish for 2018, it’s that we can expand the conversation beyond simply ‘job creation’ to ‘worker creation.’ We need to turn unemployed people, and workers on the sidelines, into qualified workers. - Bob Funk, Express CEO

“Right now, we are trying to recruit employees into the area from outside,” he said.

Ashcraft is not alone. Anne Woods, an Express office owner in Covina and Santa Fe Springs, California, says finding people is “harder than this time last year, but about the same as it has been for the last six months.”

In Grand Rapids, Michigan, Express office owner Janis Petrini notes, “We have full employment, and so companies are having to be creative about how they will tackle the shortage of labor.” Despite the challenges, she’s optimistic.

“The community partners have come together to talk about innovative and creative ways to train and cross train the workforce,” Petrini added.

In a recent survey of businesses from Express, more than three-quarters of respondents said it was “difficult” to recruit and fill positions, more than in any of the previous four quarterly surveys.

Respondents were asked, “Currently, how easy is it for you to recruit and fill positions?”

“Headlines have been filled with generally positive economic news over the past weeks and months, but here is a reminder that we’re not actually reaching our full potential—so long as we don’t have people for available jobs and jobs for available people,” said Bob Funk, CEO of Express, and a former chairman of the Federal Reserve Bank of Kansas City. “If I have a wish for 2018, it’s that we can expand the conversation beyond simply ‘job creation’ to ‘worker creation.’ We need to turn unemployed people, and workers on the sidelines, into qualified workers.”

The survey of 462 businesses, which are current and former clients of Express Employment Professionals, was conducted in December 2017 to gauge respondents’ expectations for the first quarter of 2018.

About Robert A. Funk
Robert A. “Bob” Funk is chairman and chief executive officer of Express Employment Professionals. Headquartered in Oklahoma City, the international staffing company has more than 790 franchises in the U.S., Canada and South Africa. Under his leadership, Express has put more than 6 million people to work worldwide. Funk served as Chairman of the Conference of Chairmen of the Federal Reserve and was also the Chairman of the Federal Reserve Bank of Kansas City.