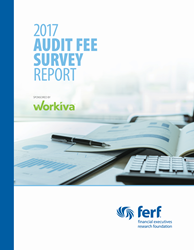 This year’s research shows that by implementing best practices internally and alongside auditors, fee increases can be mitigated.

FERF’s 2017 Audit Fee Survey Report found that the rise in public company and non-profit audit fees is slowing, while private companies saw an uptick in their fee increases during the 2016 audit season.

Survey responses suggest companies were able to mitigate fee increases by improving internal controls, planning and preparation. These improvements allowed auditors to review transactions during the course of the year and the companies to negotiate rate increases that were fair to both parties given the work involved. Changing external auditors also helped mitigate fees.

“Organizations of all types continue to prepare for the implementation of new accounting standards and take advantage of opportunities to conduct strategic transactions. These factors continue to be primary drivers of audit fees,” said Andrej Suskavcevic, CAE, President and CEO of Financial Executives International and Financial Executives Research Foundation. “However, this year’s research shows that by implementing best practices internally and alongside auditors, fee increases can be mitigated. We look forward to working with our membership to help them continue to improve audit preparation and make the audit process as smooth and cost efficient as possible.”

Audit Fees and Key Drivers of Fees Vary
The audit fees paid by 161 public companies responding to the survey averaged $7.4 million, with a median of $2.8 million. The average percentage increase in audit fees reported was 6.9 percent, and the median increase was 1.3 percent. Acquisitions and new FASB revenue recognition standards dominated the reasons noted for audit fee increases, at 71 and 60 percent, respectively.

Increased M&A volume contributed to higher audit fees for nearly three-fourths of the 80 public companies that reported fee increases for their 2016 audits. Respondents say acquisitions led to higher fees both in terms of costs related to a transaction – valuation, due diligence and post-merger integration support – as well as higher ongoing costs associated with auditing a larger entity after the transaction closed.

Audit fees paid by the 281 privately held companies responding to the survey averaged $163,993, with a median of $70,000. The average percentage increase in audit fees among this group was 3.8 percent, and the median increase was 3.7 percent.

For private company respondents, inflation was the leading factor behind increased audit fees, with 48 percent of respondents citing that reason. This was followed by acquisitions at 28 percent. Unlike their public company counterparts, new FASB and revenue recognition standards were less of an influence on audit fees, although this is likely to change as private entities prepare for the 2019 adoption of the new revenue standard.

Methodology and Sources
FERF’s 2017 Audit Fee Survey Report examines total fees companies paid to external auditors on auditing and related services in 2016. The report is based on responses from 508 financial executives at public companies, private companies and non-profit organizations. In addition, the report also examines audit fees as reported by a larger sample of 6,394 SEC filers.

Audit fee information obtained from SEC filings has been provided by MyLogIQ. The survey was sponsored by Workiva. FERF’s 2017 Audit Fee Survey Report can be obtained by visiting the online FERF bookstore at http://www.ferf.org/reports.

About FEI
Financial Executives International (FEI) is the leading advocate for the views of corporate financial management. Its more than 10,000 members hold policy-making positions as chief financial officers, treasurers and controllers at companies from every major industry. FEI enhances member professional development through peer networking, career management services, conferences, research and publications. Members participate in the activities of more than 65 Chapters in the U.S. and a Chapter in Japan. FEI is located in Morristown, NJ. Visit http://www.financialexecutives.org for more information.

For more details visit us at http://www.mylogiq.com or email info(at)mylogiq(dot)com.