Is Your Shower Making You Fat, Sick and Tired?

5 Tips on How to Avoid Fat Fertilizing Chemicals Lurking in your Shower By James Uberti, Toxic Free Market, Anti-Aging Author and Creator of Toxic Free Diet™ 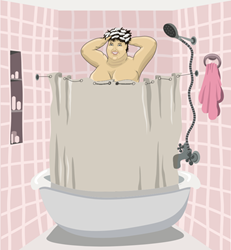 If you're struggling to lose weight or just can’t seem to understand why you keep gaining weight despite your efforts of restricting calories and exercising more?

You may want to check the products lurking in your shower. Scientists and researchers are now convinced that chemicals commonly found in most personal care products such as shampoos, shaving gels, conditioners, body wash, moisturizers, and unfiltered tap water directly affects how fat is stored, metabolized and burned.

There is increasingly more research that’s showing just how environmental toxins can directly lead to weight gain. In fact, according to Dr. Paula Baillie-Hamilton (1) she suggests the root cause of all weight gain is directly related to our own natural weight control system being overloaded and poisoned with toxic chemicals that we encounter through our skin care, food, cleaning products and environment.

Americans are exposed to hundreds if not thousands of toxic chemicals per day (2) and according to a recent article in Huffington Post. (3) The average woman puts 515 synthetic chemicals on her body every day without knowing It. Once these toxic chemicals get absorbed through the skin, they ultimately get stored in our fat cells. (also known as the body's chemical trash bins) Overtime these chemically polluted cells must fill up with water to dilute the chemical toxicity of the cell, causing fat cells to expand rapidly in order to survive. Making it extremely difficult to lose weight. "Simply put fat fertilizing toxic chemicals in your personal care products and cosmetics can literally make it possible to gain weight without actually eating". Said James Uberti, Founder of Toxic Free Market, and Creator of the Toxic Free Diet™.

Some of the worse types of fat fertilizing toxic chemicals are called endocrine-disrupting or obesogenic chemicals. These type of chemicals often mimic estrogen causing hormones to go haywire, slows metabolism, spikes Insulin and stimulates hunger hormones, all of which alters your weight control system. Even at low levels, these toxic chemicals can wreak havoc on our body’s ability to regulate hormonal balance and causes unexplained weight gain, learning disabilities in children and disease.

Below is a List of Fat Fertilizing Chemical Culprits Found in Your Shower and Should be Avoided?

BISPHENOL-A (BPA) – is an estrogenic mimicking fat fertilizing chemical used in plastic containers and bottles to make them soft and flexible called plasticizers. When plastic containers are heated these toxic chemicals leach into our foods or personal care products. Once absorbed, this chemical mimics estrogen and spike insulin and slow metabolism. Too much insulin means more and more glucose gets stuffed into our fat cells, causing them to grow larger especially in diet or exercise resistance area such as belly fat, love hands and thighs.

PHTHALATES - is also a known endocrine disrupting chemical used mostly in plastic containers, although it’s most commonly found in anything with a fragrance (shampoos, and lotions, etc.). If a product has a fragrance, you can bet this fat fertilizing chemical is included. In a 2007 study, researchers found that higher levels of phthalates detected in the urine of adult males were associated with increased waist circumference and insulin resistance.

PARABENS - is the most common endocrine disrupting chemical used as a preservative in most cosmetics and personal care products. Parabens can also mimic estrogen, the primary female sex hormone, and wreak havoc on male hormonal balance and directly affect your health and weight control system. Parabens cause the production of estrogen.

ATRAZINE - is a common herbicide (weed killer) used on most of our conventionally grown crops in the United States. This fat causing endocrine disrupting chemical makes its way into our groundwater, which ends up in our water treatment plants and ultimately in our tap water used for drinking, cooking and showering. Atrazine is mostly absorbed through your skin and lungs when breathing steam and/or through microscopic water droplets during showering. Even at low doses, atrazine has been found to cause weight gain, especially abdominal area i.e. belly fat.

1.    Read Labels and avoid personal care, cosmetics and cleaning products containing any of the above obesogenic endocrine disrupting chemicals. Be wary of claims made by personal care companies: all personal care, cosmetics and cleaning products are unregulated, and can literally be labeled as organic, non-toxic or natural even if its filled with toxic cheap chemical fillers. Good rule of thumb is; if you can't pronounce an ingredient odds are it's a cheap chemical filler.

2.    Take Things Slow: There's no need to throw out all the chemically filled products in your shower or bathroom all at once. When you run out, simply choose toxic free products or 100% organic alternatives. For personal care products that are certified non-toxic visit: https://toxicfreemarket.com/

3.    Replace your Shower Curtain: When your shower curtain needs to be replaced, simply choose PVC or BPA free version or choose a cloth shower curtain alternative.