In a recent article published in The Journal of Parasitology researchers collected and analyzed mosquitos from sites throughout Mississippi in an effort to discern which of them were Haemosporida carriers. The study examined the correlation between infection and what specific animals they primarily feed on. 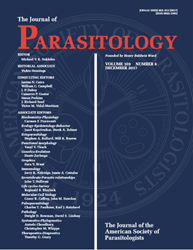 The Journal of Parasitology 103.6

This project is important because it's the first step towards an understanding of which organisms actually interact in the transmission cycle of Haemosporidians in wildlife.

The Journal of Parasitology– Malaria is a complex disease that has been the cause of illness and subsequent death in millions of people around the world. Although malaria is commonly known to be a mosquito-borne disease, much of the research has been focused on avian malaria (Haemosporida) and how birds transport the disease from one geographic location to another. Given that there are more species of mosquito that carry avian malaria than originally thought, more research dedicated to this subject is necessary to improve both human and animal health.

Researchers from Mississippi State University recently published a report in The Journal of Parasitology focused exclusively on mosquitos found throughout Mississippi. Of the 3,500 known mosquito species worldwide, the researchers collected and analyzed 15 species, totaling 27,157 females, in an effort to discern which of them were Haemosporida carriers.

The mosquitos were collected from 11 different sites throughout Mississippi, all from state parks or wildlife areas. The researchers collected the mosquitos, froze them and took them to the lab for analysis. The 27,157 mosquitos were then divided into 1,192 sample groups and subject to DNA testing.

The researchers found that 5 of 15 species tested positive for Haemosporida, which gave an overall infection rate of 4.22 per 1,000. When examining the mosquitos individually, the researchers were able to see some specific details regarding the transmission of infection to specific animals. For example, one species of mosquito that generally feeds on amphibians was negative for Haemosporida, while in another instance there was a positive correlation between infection and mosquitos feeding on mammals. A more thorough examination of the blood meals ingested by individual mosquitos is planned, and the researchers may even have the ability to identify specific mammals that are susceptible to infection.

“This project is important because it's the first step towards an understanding of which organisms actually interact in the transmission cycle of Haemosporidians in wildlife,” says corresponding author, Diana Outlaw. “Prior to this project, we had absolutely no idea which mosquitoes transmitted which Haemosporidian parasites to which vertebrates! And, we still have a long way to go, but we found that a much greater diversity of mosquitoes carry Haemosporidians than we previously thought, and that they carry not only parasites that infect birds, but also a novel parasite that we believe is found only in deer. We are currently following this project up with an analysis of the blood meals that some of the mosquitoes collected for this project were carrying.”

Because so much of the current research is focused on avian transmission of the Haemosporidian parasites, this study is of great significance to understanding insect transmission. With thousands of species of mosquitos worldwide, the ability to identify which mosquitos are malaria carriers and which specific animals they feed on will be an enormous asset to both human and veterinary medicine.