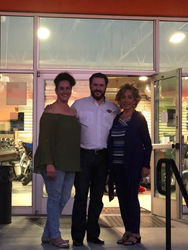 With their help, it will allow us to move onto the next chapter in our lives. - Anastasia Polles

Performance Brokerage Services, a new car and Harley-Davidson dealership broker is pleased to announce the sale of Sweetwater Harley-Davidson in National City, California from mother and daughter, Marianna and Anastasia Polles to Mark Smith. Sweetwater Harley-Davidson was established in 1985 the Tom Horning. Tom formed the first H.O.G. Chapter in California, which is nearly 30 years running. He also helped to establish the Tijuana Toy Run, which is the world’s largest international toy run. Sweetwater Harley-Davidson was the first dealership to feature an in-house tattoo studio on the West Coast and the first dealership to hold a biker church, named the Biker Breakfast. Tom passed in 2008 and left the dealership to his wife and daughter, Marianna and Anastasia Polles. Following the sale, Marianna shared, “Tom was out riding and came home one day in 1984 and said, ‘I bought a Harley-Davidson dealership!’, which became South Coast Harley-Davidson in a little 2,300 square foot dealership on Main Street in Chula Vista.” A few years later, they expanded into a 15,000 sq. ft. facility on E Street. In March 2008, Tom and his family opened his dream Harley-Davidson dealership with the Grand Opening of Sweetwater Harley-Davidson in National City. The 43,000 sq. ft. dealership features and 8,000 sq. ft. upper deck with an executive office, roof access with tables, benches and room for major events for customers while overlooking San Diego County. Unfortunately, Tom Horning passed away in April 2008, just a month after his grand opening, though Marianna and Anastasia continued to operate the dealership in his vision focusing on innovation and community giveback. Anastasia was quoted after the sale, “This was a very difficult and stressful transaction, but George Chaconas was able to help and guide us through the process. Without George’s expertise and tenacity, we would not have been successful. We also want to thank his assistant, Jennifer Malcolm, as she was a lifesaver. With their help, it will allow us to move onto the next chapter in our lives.”

Mark Smith, the new owner of Sweetwater Harley-Davidson, is bringing tremendous experience to National City. A motorcycle enthusiast since 1992 when he built his first Sportster, Mark Smith also owns and operates Orange County Harley-Davidson in Irvine, California, Harley-Davidson of Fort Worth, Texas and Stampede Harley-Davidson in Burleson, Texas, which was awarded to Mark as a new location in 2015. That was the first newly added point in 8 years. After the purchase of Sweetwater Harley-Davidson, Mark Smith shared, “This is the second Harley-Davidson dealership that we were able to acquire with the help of George Chaconas and Juan Pardo of Performance Brokerage Services. I am very grateful that they assisted with this exciting opportunity to expand our footprint in Southern California. They were very professional and helped tremendously with a sensitive, multi-generation family. If it was not for their patience and follow up, this deal would not have happened. Thank you very much and I look forward to working with you guys again.”

The dealership will operate under its new name Coronado Beach Harley-Davidson. Mark intends to
rebuild the local ridership community and add the EagleRider Motorcycle Rentals & Tours, as well as a Rider’s Academy.

George C. Chaconas, the exclusive agent for this transaction and the head of the National Harley-Davidson and Powersports Division for Performance Brokerage Services commented, “I am privileged to have been involved in such life changing events. Marianna and Anastasia have selected the perfect buyer in Mark Smith to carry on their family’s legacy.”

The company offers a different approach to the automotive, Harley-Davidson and Powersports industries by providing complimentary dealership assessments, no upfront fees, no reimbursement of costs and is paid a success fee only. Performance Brokerage Services gets paid only after the client gets paid.