Unstructured Play of Imagination Playground Teaches All Ages the Limitless Potential of Creativity in a Structured World. 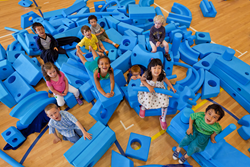 Imagination Playground, LLC, creators of the revolutionary play space concept that encourages child-directed, unstructured free play, announced today that its 2018 spring Learn & Play Tour will once again unleash childhood creativity with events that are not only wildly entertaining, but also educational and transformative.

In partnership with Children’s Museums around the world, Imagination Playground will launch its North American spring Learn & Play Tour on February 9th at Kidspace in Pasadena, California. In partnership with 17 Host Museum and Science Centers, the events bring together children, parents and educators to witness how creative play can reshape our destiny and discuss and learn about the global state of play.

Imagination Playground is on a mission to transform the lives of children, parents, educators, caregivers, researchers and leaders by uniting them in a community of advocates who believe in the importance of creative free play. Using Imagination Playground’s innovative big blue building blocks, kids will create, and collaborate for a fun, inspiring time. They will learn how to work together and how to let their imaginations run wild. Imagination Playground exists to help children take a break from structured and often solitary entertainment and enjoy the magic and imagination of cooperative play. It’s critical to a child’s intellectual, social, physical and emotional health, and more important to the kids, it’s just plain fun.

“Our Learn & Play Events are popular because children, despite the over reliance on and overuse of technology, really do want to enjoy the worlds of creativity, fantasy and magic,” said Dave Krishock, President of Imagination Playground. “This year’s events are going to be exemplary. We’ll see children work together to build bridges, make connections, and tear down walls.”

Children are not the only ones to benefit from Learn & Play. Parents attending the Learn & Play events will also be transformed and encouraged. They will experience nostalgia, but they will also gain a new appreciation for the creativity inherent in all children as they enjoy building and creating structures and creatures with Imagination Playground’s big blue blocks. It’ll even encourage parents to get down on the floor with their kids, join in on the fun, and get their own lesson in creative problem solving and democratic play.

The Learn & Play Tour will visit 17 cities in North America, including San Francisco, Miami, Chicago and Ontario. Educators are eligible to receive teaching credit for their attendance as well as Small Block Sample Pack. Families will receive a pop-out Mini Playground for attending. For more information and a schedule of events, visit http://www.imaginationplayground.com/mission/learn-play-tour.html.