With Super Bowl 52 just days away, details for Bullseye Event Group's signature Players Tailgate at the Super Bowl is finalized and bigger and better than ever before. 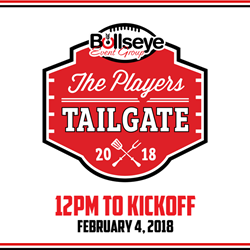 “The menu, the chefs, the emcee and the caliber of players that we’ve got at this year’s Players Tailgate is absolutely outstanding, and we can't wait to have our VIP fans experience what we've put together.” - Kyle Kinnett, CEO, Bullseye Event Group

Bullseye Event Group’s lineups, teams and menus are officially set for the 2018 Players Tailgate at Super Bowl 52 in Minneapolis!

Taking place on February 4, 2018, Bullseye’s 2018 Players Tailgate, rated the #1 event Super Bowl weekend in Houston in 2017, promises to be the biggest and best pre-game event in Minneapolis ahead of Super Bowl LII in 2018. With over 40 players, America’s favorite chef, Guy Fieri, and a team of celebrity chefs, and FOX Sports’ Charissa Thompson as the event’s emcee.

“It was an honor to be named the best Super Bowl weekend even in Houston last year, and for 2018, we’ve decided to up our game once again,” Bullseye Event Group CEO Kyle Kinnett said. “The menu, the chefs, the emcee and the caliber of players that we’ve got at this year’s Players Tailgate is absolutely outstanding, and we can't wait to have our VIP fans experience what we've put together.”

Host & Celebrity Chef Guy Fieri returns once again as headliner to help with the creation of an exclusive VIP menu, and will be on-hand to not only provide this culinary experience of a lifetime, but to hang out and meet all VIP guests at the 2018 Players Tailgate. The most recognizable chef in America, Fieri can be seen almost every day on Food Network, featuring shows such as Diners, Drive-Ins and Dives, Guy’s Grocery Games, Guy’s Big Project, Guy’s Big Bite and more.

Celebrity chef Aaron May, known widely as one of the greatest event caterer’s in all of the United States, returns once again with Bullseye Event Group, to help Fieri and others create a once-in-a-lifetime menu. May, a member of the Arizona Culinary Hall of Fame, can be seen in Food Network’s Guy’s Big Bite, Guy’s Grocery Games, Diners, Drive-ins and Dives, and more.

Chef Akira Back was just awarded as a recipient of the prestigious 2018 Michelin Star, the highest honor a chef can earn for a restaurant. Chef Back can be seen on Food Network’s Iron Chef America, NBC’s The Today Show, the Cooking Channel’s United Tastes of America and more. Along with the 2018 Michelin Star, Akira has been awarded the title of “Rising Star” by Restaurant Hospitality (2008) and has had the distinct honor of hosting the James Beard House dinners (2008, 2010-2014). Since opening his Yellowtail Restaurant & Lounge in 2008, Chef Back has also been named the “Best Chef in Las Vegas” by Las Vegas Weekly, and has participated in some of the culinary world’s most prestigious events, include the Aspen Food & Wine Festival, Pebble Beach Food & Wine Festival and Bon Appetit’s Vegas Uncork’d.

Chef Brian Malarkey is a world-renowned chef with more than a dozen wildly successful restaurants across the United States, including Herb & Wood, his newest concept in San Diego’s buzzing gusto comic neighborhood of Little Italy, which Zagat has named one of 2016’s biggest restaurant openings. Malarkey was a Top Chef finalist and winning mentor on ABC’s The Taste, and can be seen as a regular judge on Food Network’s Guy’s Grocery Games.

Both on and off the field, and as the former co-host of the Hollywood News show Extra with Mario Lopez, Thompson has covered countless high-profile events, such as Super Bowl XLV, the 2010 Winter Olympics, the FIFA World Cup and more, as well as hosting ESPN’s SportsNation and Numbers Never Lie. Thompson has now moved to FOX Sports where she is the current host of FOX NFL Kickoff, and can be seen on the #1 rated Sunday FOX NFL Pre-Game show, as well as Sunday game-break segments for the NFL on FOX.

The world-renowned DJ Irie returns in 2018 as the official Players Tailgate DJ! As the first professional sports franchise DJ in the United States, DJ Irie is the official DJ of some of the most iconic brands in the world, such as Carnival Cruise Lines, the Miami Heat, Target, Mountain Dew Kickstart, Evian, Jamie Foxx and more. Founder of the Irie Foundation and Irie Weekend, DJ Irie has become one of the most established DJ’s in the industry.

With a combined 55 Pro Bowl selections, 31 All-Pro nods, five Super Bowl championships and eight former first-round draft picks, the official lineup for the 2018 Players Tailgate is bigger and better than ever before. The official lineup:

At the 2018 Players Tailgate at Super Bowl 52, Bullseye Event Group would like to recognize some of its corporate partners:

Tickets to the 2018 Players Tailgate at Super Bowl LII in Minneapolis can be purchased directly from BullseyeEventGroup.com, or are included in all of Bullseye’s Super Bowl LII Travel Packages.

Call Bullseye Event Group today at 317-800-5820 for pricing and insider information regarding the Super Bowl 52 Travel Packages and the 2018 Players Tailgate at Super Bowl 52!