The International Association of Registered Financial Consultants (IARFC) is proud to announce that James B. Moss, RFC® of Money Concepts in Indianapolis, IN is the 2018 recipient of the IARFC Founder’s award. In honor of the IARFC Founder John J. Gargan, this tribute is presented to members who have delivered significant service to the operations and growth of the IARFC. 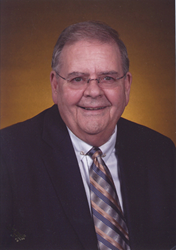 Jim’s boundless energy and willingness to help and share with others and his ability to break down barriers and establish new standards is an inspiration to us all... Denis Walsh, Money Concepts President and CEO

Those considered as recipients of this prestigious award must have been a past or present Board Director, Officer or committee member, have held a professional designation awarded by the IARFC, possess a clean regulatory record, and be a member of good standing for a minimum of 5 years. They must have achieved a high ethical and professional standard and most importantly, helped expand the visibility of the Association.

“Volunteering time and effort to enhance the vision of the IARFC and its Founder is a selfless gesture,” remarks Chairman and CEO H. Stephen Bailey, MRFC. “Without dedicated persons like Jim, the Association would not survive. With committed individuals, we can plan and achieve a bright future. I congratulate him wholeheartedly.”

Jim Moss has been a member of the IARFC since 2005 but his personal career in financial services spans over 6 decades. During this extensive time period, he has brought excellence and passion to field sales roles, executive home office roles and to leadership development and training. A pioneer in recognizing industry changes in distribution and client service, in 1981 Jim joined Money Concepts International, a financial planning and wealth management firm. He launched their Cross Roads of America region in Indianapolis which today consists of 12 offices and 23 wealth coaches operating in banks, tax practices and retail centers across Indiana. In addition to building this region, he served as Director of Continuing Education for Money Concepts International for almost 25 years.

With Money Concepts, Jim has received many awards and much recognition. Most notably, he has received the “Chairman’s Award”, is one of very few to have received the “Legend’s Award”, and the second person ever to receive the “John P. Walsh Award”. In response to Jim Moss receiving the Founder’s Award, Money Concept’s President and CEO Denis Walsh voiced the following admiration, “Jim’s boundless energy and willingness to help and share with others and his ability to break down barriers and establish new standards is an inspiration to us all.”

Nearly sixty-four years later, Jim is still working with advisors and giving back to his industry. Currently, he holds the Registered Financial Consultant designation (RFC®) and is a dedicated member of the IARFC Board of Directors. Jim Moss personifies the belief that the role of a well-trained financial professional is a noble and important calling.

He and his wife Carol have been married for 65 years and have six children, eleven grandchildren, and five great grandchildren. They currently live in Noblesville, Indiana and are very active in the Orchard Park Presbyterian Church.

“I am honored and appreciative to receive the Founder’s Award,” responded Jim to this announcement. “The fellowship with the members and the Board of Directors has always meant a great deal to me. It is an exhilarating experience and I am proud to support the Association.”

The Founder’s award will be presented to James B. Moss during the awards banquet at the IARFC 2018 Biltmore Conference in Asheville, NC on April 18. Those who wish to attend the conference can register now and experience the complete roster of presenters, topics and exhibitors.