Jaclyn Holt has 11 years’ experience in title and mortgage industries. 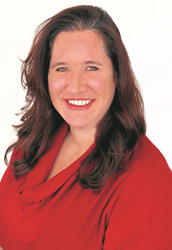 Jaclyn has been with us for 18 months as an escrow assistant and wanted to take a more people-facing role as an escrow officer. She will be a great asset to our customers here in El Paso County.

Combining more than a decade’s experience in both the mortgage and title industries, Jaclyn Holt has moved into a mentoring program to prepare for her work as an escrow officer for North American Title’s (NATC) Colorado Springs office on Cascade.

“Jaclyn has been with us for 18 months as an escrow assistant and wanted to take a more people-facing role as an escrow officer,” said Lori Dunlop, branch manager, NATC Colorado Springs branch. “Now that she’s learned the background of the escrow process, she is handling her assistant duties in addition to mentoring for the closing duties she will take on.”

“People like the way she presents the closing documents,” added Dunlop. “She will be a great asset to our customers here in El Paso County as well as for the NATC operation.”

Holt’s previous career in the mortgage industry began in Arizona where she worked at two mortgage companies as a loan processing assistant and then as an account executive. Moving to Colorado in 1999, she held several positions in loan processing and as a home loan consultant. Holt migrated to the title industry in 2015, working first as an escrow assistant for a Denver company and then moving to Colorado Springs to work for NATC.

“North American Title has an amazing work community,” said Holt. “I enjoy working with all the home buyers, sellers and refinance customers to ensure they feel welcomed and valued while closing with us.”

About North American Title
With well over 1,200 associates and a network of branches from coast to coast, North American Title Group, LLC (NATG) is among the largest real estate settlement service providers in the United States. Consisting of both agent and underwriter operations, NATG reported annual gross revenues in fiscal 2016 of $360.2 million. The company also has the resources and stability of being a wholly owned subsidiary of an S&P 500 company with over $15.3 billion in assets as of its fiscal year ended November 30, 2016. North American Title’s agency network operates nationally under the name North American Title Co. and similar names (NATC) in 18 states: Arizona, California, Colorado, Delaware, Florida, Illinois, Indiana, Maryland, Minnesota, Nevada, New Jersey, New York, North Carolina, Pennsylvania, South Carolina, Texas, Utah and Virginia, in addition to the District of Columbia. Through our relationship with our expanding affiliate network, NATC provides or is able to coordinate real estate settlement services in all 50 states. NATG is headquartered in Miami, Florida. To learn more, visit http://www.nat.com