A new study helps explain size differences between genders of turtles from around the world. Temperature is one factor that may play a key role in a changing climate. 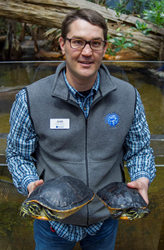 It may sound like a lofty concept, but understanding sexual dimorphism — or the difference in size or appearance between males and females of a particular species — is simple enough if you consider male birds. From crimson Cardinals and azure Peafowl to emerald-crowned Wood Ducks, the bird world is packed with examples of males exhibiting brighter, more vivid coloring than their comparatively drab females counterparts.

Among turtles, sexual dimorphism tends to boil down to a difference in size, but the factors that drive female turtles to tower over males, or vice versa, is a largely understudied topic.

Recently, however, researchers from the Tennessee Aquarium Conservation Institute and the University of California, Davis, sought to fill this gap in herpetological knowledge. By parsing data from many previously published studies, the group was able to create a meta-analysis that highlights, on a global scale, the natural forces that determine how male and female turtles measure up to each other.

“Many people have looked at habitat or reproductive behavior as correlates to tell if males will be larger than females, or vice versa,” he adds. “But what people had not yet done was combine that data with temperature and other environmental variables to see if there’s a more complex story there.”

After analyzing data on more than 135 species from nine turtle families, the study found links between the direction of sexual size dimorphism and the latitude at which a species is found, the temperature variation and precipitation of its habitat, and whether that habitat was primarily aquatic, semi-aquatic or terrestrial.

“Our study not only highlights how modern climates may influence sexual size dimorphism in turtles but shows that these patterns are not random among closely related species,” says Mickey Agha, a PhD candidate at UC Davis and the study’s lead author. “We found that a portion of the variation in sexual size dimorphism is due to some species’ shared evolutionary history.”

The publication of this study opens the door to follow-up research into how environmental factors drive sexual dimorphism on a finer — continental or regional — scale in turtles. As ectothermic or “cold-blooded” animals, turtles derive their heat from their environment, meaning the study also has potential application for scientists analyzing how environmental changes could impact reptiles, Ennen says.

“With turtles, in general, there are a lot of research opportunities,” Ennen says. “Climate change is definitely a big deal for reptiles.”

A few of the ways in which climate impacts turtles is in growth and reproduction. While developing, the sex of embryos of many turtle species is determined by the ambient temperature. There may be a time that the ambient nest temperatures become too hot, and that will affect the sex ratios of their nests. More embryos develop as females when temperatures get warmer.

In some parts of the world, turtles may already be impacted by a warming climate. A study published on Jan. 8 in the journal Current Biology found that recently hatched Green Sea Turtles from the northern stretches of Australia’s Great Barrier Reef have been more than 99 percent female due to increased temperatures at their nesting sites.

The Tennessee Aquarium exhibits the world’s largest collection of freshwater turtles, from Pignosed and Giant Snake-necked Turtles to Radiated and Gopher Tortoises.

Visitors to the Aquarium can engage in citizen science as they explore by looking for sexually dimorphic traits that distinguish males and females. If they see a Box Turtle with red eyes, for instance, it’s a male. And in the Delta Country gallery, guests can tell female and male Florida Red-Bellied Cooters apart by the females’ stubbier tails and the males’ long claws, which they delicately flutter in the face of prospective mates.

Learn more about turtles and other reptiles at the Aquarium.

An abstract of the turtle sexual size dimorphism study is available online.