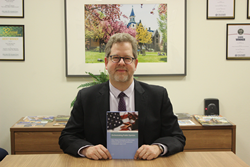 "It follows that if people don’t understand music, they are more vulnerable to appeals to emotion through music.”

As we celebrate our democracy this President’s Day, Seton Hall University Professor Paul Christiansen, Ph.D., of the College of Communication and the Arts, offers new insights into presidential elections in his first book, Orchestrating Public Opinion: How Music Persuades in Television Political Ads for U.S. Presidential Campaigns, 1952-2016, published this year by Amsterdam University Press. The book is a collection of nearly a decade of research and writing by the Westfield, New Jersey native, who is a musicologist specializing in Czech music and music in political advertisements. He has been called upon over the years by NPR and BBC Radio 3 to offer expertise on his electoral research. His research is the first of its kind to delve into the effects the use of music in presidential campaign ads has on viewers.

For years, media professionals and social scientists have studied music as only one element of many in campaign ads. However, most media professionals and social scientists do not have the musical sophistication to analytically listen to music and recognize its ability to manipulate the audience. Christiansen’s research argues that music can be the dominant factor in a campaign ad, due to its ability to set a mood and influence viewers’ perceptions.

“In the beginning of the twentieth century, a New York Times music critic could write a review and include actual printed music examples so that readers could follow the argument,” said Christiansen. “Such widespread musical literacy can no longer be assumed. It follows that if people don’t understand music, they are more vulnerable to appeals to emotion through music.” Christiansen echoed these sentiments during a 2016 NPR Academic Minute segment. Christiansen said, “Understanding how music works in the context of campaign ads is key to arming ourselves against its persuasive power."

Americans were introduced to televised presidential ads during the 1952 presidential race between Dwight D. Eisenhower and Governor Adlai Stevenson II. The Walt Disney Company donated their time to produce the upbeat “Ike for President” ad for the Eisenhower campaign. This ad was a game-changer in presidential campaigning and the music in it was composed to be a catchy tune that would stick with viewers over time. Research on the 1952 election is featured in the chapter “The Age of Innocence,” which refers to the new frontier that was televised presidential campaign ads.

Part of its contagious character can be attributed to the ostinato in the bass, “Ike for President.” The ostinato is a repetitive tonal motive which occurs fifteen times and another four times with the same words and different melodies. With “Ike” as the word on the resolution of the tonal and rhythmic tension, the ad situates Eisenhower positively. The general character of the cartoon ad is jauntily militaristic, with parades of citizens following an Uncle Sam drum major.

Christiansen’s research on each election since 1952 is featured in a chapter of his book, except for the 2004 election between George W. Bush and Senator John Kerry. “I had to cut the 2004 election into two chapters,” explained Christiansen. “It just could not fit into one. There was so much music used in interesting ways in the campaign ads of this election.”

While Christiansen does not favor a specific advertisement, his research of the 2004 presidential election defines the 2004 “Wolves” ad as a watershed moment. According to surveys, this specific ad was the only one to have “high, unaided recall” in viewers. It was one of many ads of the 2004 election to traffic in fear. The 30-second ad is set in a dark, eerie forest. Viewers see wolves, meant to represent terrorists or terrorist cells, lurking and presumably searching for their next prey. At the end of the ad, the wolves scatter in different directions. This imagery is intended to evoke fear in viewers following the 9/11 terrorist attacks, but the music chosen for the ad magnifies that sense of fear. “Bush barely won the 2004 election and you can only help but wonder to what extent the music played a part in that,” said Christiansen. “It is an interesting question, but one that is unanswerable.”

Music in “Wolves” is meant to be felt rather than heard – let alone analyzed. Electronically generated sounds distance the music from attempts at analysis, and the overall effect is surreptitious. In the ad proper, the last line is “And weakness attracts those who are waiting to do America harm. The climax at the word “waiting” brings the advertisement together, where the music is loudest and most suspenseful. “Waiting” is punctuated by a loud, dissonant chord followed by silence that primes the audience for the chilling four-word tagline: to do America harm.

As he was finishing his research, the 2016 presidential campaign complicated his writing situation. “I was forced to break away from my narrative and my thesis a bit and even had to ask my editor for more time to analyze and write about the election,” explained Christiansen. “In 2016, music had to be set aside a bit in my narrative in order to address what could not be ignored.” The 2016 election had many more nuances affecting the outcome of the election than years prior, chief among which was the controversy surrounding the Democratic primary and the large rift that it created among progressives and liberals. Still, Christiansen was able to identify some standout ads from the 2016 election, including Senator Bernie Sanders’ “America,” and President Donald Trump’s “Outsourcing.” President Trump’s “Outsourcing” ad utilized music that sounds like Bollywood film underscoring. People typically associate outsourced jobs with India, and the music, voiceover and design choices in this particular ad bring people to that conclusion even quicker than without it.

Of course, it is the music that gives [“Outsourcing”] its most distinctive Oriental flavor. A motive in a kind of proto-E minor tonality is repetitive, highly ornamented, and centering around one pitch (D♯, in this case)—all traits found in much non-Western music. Although it is difficult to distinguish individual instruments because the music volume is so low, the instruments have a bright timbre with many prominent overtones; this is characteristic of music from Southeast Asia. Music gives the ad its distinctive atmosphere.

Christiansen plans to share his research with Seton Hall students through future course offerings on the 400 South Orange Avenue campus in South Orange, New Jersey. To learn more about Orchestrating Public Opinion: How Music Persuades in Television Political Ads for U.S. Presidential Campaigns, 1952-2016, click here. Christiansen will be at the South Orange Public Library on Thursday, March 29 at 1 p.m. for a reading and discussion of his book.