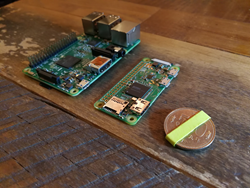 On February 15th, Keychain, Singapore-based blockchain technology company, demonstrated a ground-breaking release of its IoT data security platform to the Japan Ministry of Economy, Trade and Industry (METI) and to the New Energy and Industrial Technology Development Organization (NEDO) in Japan. The occasion marked the creation of the world's most lightweight, blockchain-based, data provenance software in terms of device memory required.

During the demonstration, Keychain's software consumed less than 8 MB of resident memory, more than 180 times less than the 1.4 GB used by IOTA software. Keychain's demonstrated its software on the Raspberry Pi Zero, an IoT device with a RAM capacity of 512 MB RAM and a cost of only about $5 USD. Keychain's achievement brings to the market a new security infrastructure that when run on small and cheap hardware, increases cyber security, enables new data markets, and significantly increases the profit margins of IoT data projects.

A key problem in IoT cyber security is known as the data provenance problem, a problem that pertains to questions such as: 1) "Who can access certain data?", 2) "Who/what device created the data?", and 3) "Has the data been changed since its creation?" As data passes through different networks and is stored in various places. While most IoT security solutions focus on protecting the device from hackers, Keychain solves this provenance problem while removing dependencies on third parties such as certificate authorities and hardware SIM providers.

Achieving the small memory footprint of the Keychain client was made possible in part by a research grant provided by NEDO. Keychain was awarded the grant by NEDO as a result of winning the Jury Grand Prize at the Third IoT Lab Selection competition organized by the IoT Acceleration Lab and the Japan METI in March 2017.

Keychain is a Singapore-based blockchain technology company that fortifies operational integrity for finance, industry, and enterprise. Keychain provides global, blockchain-based, data-provenance platform and solutions to its clients. Keychain was founded by Jonathan Hope and Kazuyoshi Mishima in 2016.

For any questions, please contact info(at)keychain.jp. "Raspberry Pi" is a trademark of the Raspberry Pi Foundation.