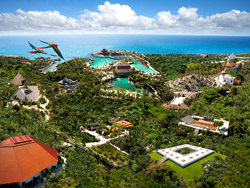 Xcaret Park in Cancun and the Riviera Maya was awarded Silver Travvy awards for “Best Water Park” and "Best Theme Park” during the 2018 awards ceremony. The double recognition was presented at the annual event, which was held at Gotham Hall in New York.

The Travvy Awards, presented by travAlliancemedia, recognize the highest standards of excellence in the tourism industry. The award honors travel companies, travel products, travel agencies and destinations for outstanding achievements. The winners were chosen by a panel of judges representing some of the most influential and prestigious travel agencies in the United States.

These recognitions were also awarded to Xcaret Park in 2016 and 2017. The park has competed against theme parks such as Disneyland, Seaworld, Busch Gardens and Universal Orlando, as well as water parks including Universal’s Volcano Bay, Atlantis Paradise Island and Aquatica Orlando.

Xcaret Park opened in 1990 and has welcomed more than 23 million visitors from all over the world. Since its inception, Xcaret Park has stayed true to Mexican culture by paying tribute to the country and enriching the park experience through unique attractions such as a multi-level aviary, a Mayan village and underground rivers.

ABOUT XCARET
Xcaret is Mexico's majestic paradise located on the shore of the Caribbean Sea. Here you can find cultural, nature and aquatic experiences unlike any other. The park features everything from amazing marine and land species, protected by Xcaret’s conservation programs, to a grand spectacle with more than 300 artists on stage.