“Jenny” from Christian Faith Publishing author Ronald Stanchfield is the story of a young and successful mother whose son is kidnapped and returned hours later. Jenny will find herself in an adventure filled with disappearances and murder as she sets out to unravel a thrilling mystery. 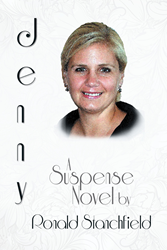 “Jenny” is the creation of published author, Ronald Stanchfield. Inspired by a junior high school English teacher who loved his writings and discovered his writer’s heart, Ronald became a lifelong writer of stories, biographies, and poetry, mostly for private consumption. After growing up and working in the environment of a family corporation, Ronald and his identical twin attained board-level management positions before selling the business. Rewards of this corporate lifestyle offered Ronald extensive travel across the US. It also provided fodder for his writing.

Published by Christian Faith Publishing, Ronald Stanchfield’s new book invites readers to join in an adventure that starts with church-step assassination and a bizarre kidnapping.

Jenny is no ordinary woman. In her early thirties, she is young, attractive, and very intelligent. She is also a working wife and mom who happens to be a highly successful marketing executive for the nation’s largest toy company. She is someone who obsesses about whatever her current passion happens to be.

After her ten-year-old son, Jason, is kidnapped then discovered hours later in a restroom in the Mall of America with no memory of his ordeal, she is compelled to discover what really happened and why. When people around her begin disappearing and dying, she quickly realizes that she could be next. With the help of the Mall of America’s head of security, Jenny goes undercover to expose secrets that reach deep into world politics. They are secrets no one wants revealed.

Consumers can purchase“Jenny” at traditional brick & mortar bookstores, or online at Amazon.com, Apple iTunes store, or Barnes and Noble.

For additional information or inquiries about “Jenny”, contact the Christian Faith Publishing media department at 866-554-0919.