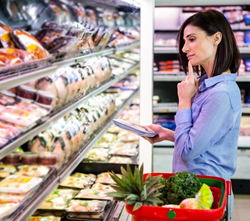 Getting What You Pay For in the Supermarket

If you see a weights and measures inspector while out and about in your community, please thank them.

At the 102nd NCWM Annual Meeting in July 2017, Chairman Jimmy Cassidy of Cambridge, MA Department Weights and Measures announced his theme for the year, “Back to the Basics as we Arrive in the Cloud”. Cassidy explained that one pound still equals 16 ounces, one mile still equals 5,280 feet, and one gallon still equals 231 cubic inches. The measurement does not change. However, the measuring devices and systems have evolved greatly since the early 20th century from mechanical, to electronic, to the proverbial black box, to cloud-based measurement systems of today.

NCWM now has commercial standards for vehicles for hire that use GPS to measure distance traveled; electric vehicle charging stations that measure in kilowatts per hour; and systems that measure hydrogen fuel by the kilogram to fuel hydrogen vehicles. These are just some areas where the weights and measures standards have been developed to accommodate the expanding technologies of the 21st century.

Another new initiative being assigned to weights and measure inspectors is looking for highly sophisticated credit card skimmers that are being installed illegally in gas pumps across the country. These devices cause millions of dollars in losses to consumers and businesses.

NCWM is now working with a growing list of jurisdictions across the country on weights and measures standards to apply to legalized sale of cannabis. Chairman Cassidy saw the need for this guidance for regulatory officials, consumers, and the cannabis industry. A new Cannabis Task Group held its first meeting during the January 2018 NCWM Interim Meeting. Five focus groups were created that will address the suitability of scales, proper method of sale for cannabis in its various forms, packaging and labeling, reasonable moisture loss of packaged products, safety for inspectors and more. Chairman Cassidy’s goal is to have a NCWM guidance document in place within a year for weights and measures officials to use in regulating cannabis in the marketplace.

While Cassidy is amazed by the fast-changing technologies and marketing practices in the United States, he is even more amazed with the ability of the weights and measures community to accommodate those changes. “We owe a great debt of gratitude to the regulators and industry representatives for their ability to come together at NCWM to adapt and provide reasonable commercial standards for the fast-paced changes in the American marketplace,” said Cassidy. “If you see a weights and measures inspector while out and about in your community, please thank them,” he added. “They protect the marketplace for consumers and businesses, whether that be at a supermarket or a gas station in the great tradition of the NCWM motto, ‘That Equity May Prevail’.”