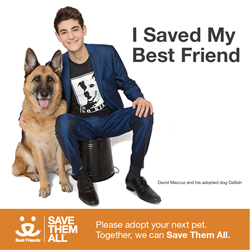 My animals saved me and continue to do that every day. They have the power to save us and teach us so much. It's our duty to return the favor.

The actor who plays young Bruce Wayne --before he becomes Batman --has a real-life crusade, joining forces with Best Friends Animal Society to save the lives of dogs and cats in America’s shelters.

David (pronounced "Dah-veed") Mazouz began his career at age eight doing commercials. He has appeared as a guest star in shows such as “Mike & Molly,” “Criminal Minds,” “Private Practice,” “The Office,” “Drop Dead Diva,” and “Major Crimes.” He also starred in several films working with Joseph Fiennes, Kevin Bacon, Radha Mitchell, Aaron Eckhart and Ed Asner among a few. At age 11 he was cast in his first TV series co-starring alongside Kiefer Sutherland as his son for two seasons. David went on to land a leading role on FOX's hit series “Gotham,” the following year where he plays Bruce Wayne in the prequel show which is now in its fourth season. When David is not working as "young Batman" in New York, he attends school in Los Angeles where he was born and still lives with his parents, his sister and his dogs Starlet & Delilah.

"My animals saved me and continue to do that every day. They have the power to save us and teach us so much. It's our duty to return the favor. Join Best Friends in their mission to Save Them All. An easy way to make the world better. "

According to national statistics, each day nearly 4,100 dogs and cats die in the nation’s shelters. Best Friends has brought increased awareness to how people can get involved in the solution by adopting, spaying/neutering their pets, donating, volunteering and sharing this message with their friends.

About Best Friends Animal Society®
Best Friends Animal Society is a leading national animal welfare organization dedicated to ending the killing of dogs and cats in America's shelters. In addition to running lifesaving programs in partnership with more than 2,100 animal welfare groups across the country, Best Friends has regional centers in New York City, Los Angeles, Atlanta and Salt Lake City, and operates the nation's largest no-kill sanctuary for companion animals. Founded in 1984, Best Friends is a pioneer in the no-kill movement and has helped reduce the number of animals killed in shelters nationwide from 17 million per year to about 1.5 million. That means there are still more than 4,100 dogs and cats killed every day in shelters, just because they don’t have safe places to call home. We are determined to get that number to zero by the year 2025. Working collaboratively with shelters, rescue groups, other organizations and you, we will end the killing and Save Them All. For more information, visit bestfriends.org.