Look for new Federal Reserve Chair Jay Powell, who succeeded Janet Yellen at the end of January, to set forth multiple Federal Reserve rate hikes this year, according to Rajeev Dhawan of the Economic Forecasting Center at Georgia State University's J. Mack Robinson College of Business. 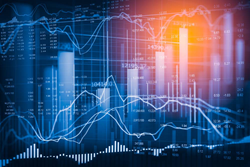 Look for new Federal Reserve Chair Jay Powell, who succeeded Janet Yellen at the end of January, to set forth multiple Federal Reserve rate hikes this year, according to Rajeev Dhawan of the Economic Forecasting Center at Georgia State University's J. Mack Robinson College of Business.

"Three is a safe bet based on my projections for growth," Dhawan wrote in his "Forecast of the Nation," released today (Feb. 28). "But this first one, expected in March, may get delayed if financial markets are in turmoil."

Dhawan points out that the markets had a near correction in February and the 10-year bond rate spiked 50 basis points since early January. Financial markets are fearful about inflation. The forecaster notes they seem to be heading toward a correction because of these inflation fears.

"The seed of this inflation fear was planted with the release of the Jan. 26 gross domestic product (GDP) report showing 2.6 percent growth for the fourth quarter, a drop from 3.2 percent growth in the third quarter," said Dhawan. "The reason for this slowdown was that hurricane rebuilding efforts lifted third-quarter GDP growth somewhat and faded by the fourth quarter."

The personal consumption expenditure (PCE) deflator, which measures prices paid by consumers for goods and services, also reached a four-year high and came in near the Fed's 2.0 percent target inflation rate, causing a late January sell-off.

"What really ignited the fire," Dhawan said, "was the employment report released in early February, which showed not only a solid gain of 200,000 new jobs, but, more importantly, a jump of 2.9 percent in wage growth."

The markets were already skittish, he said. This bump up in wage inflation just fueled the fire and resulted in a 1,200-point drop in the Dow index.

"The recent volatility in markets is of concern, mainly due to exaggerated fears of inflation materializing rather than reality," Dhawan said.

Despite the fear of a stock market correction, most consumers should have something to look forward to in 2018.

The additional consumer spend because of these gains will stimulate business demand and allow for GDP growth near 3.0 percent in the first half of 2018. Dhawan points to business investment to keep the ball rolling through the rest of the year.

"The tech investment rate is the best predictor of future job and income growth," he said. "It should go up to 8.5 percent in 2018, and, along with an increase in the equipment investment rate, we should see 3.1 percent GDP growth in 2018."

"Housing starts will average 1.25 million over the next three years, unable to push higher due to rising mortgage rates and skittish, millennial first-time buyers," Dhawan said.

Without housing starts moving to the 1.5 million mark because of the above factors, the economy will be unable to sustain a 3.0 percent-plus growth rate.

"Another way to try to push GDP higher is through vehicle sales," Dhawan said. "But, if you have used every trick of financing to give subprime borrowers a vehicle in the last five years, you can't milk this avenue anymore as rates rise."

"The question going forward is will this moderation continue or will the positive national and international developments arrest this moderation trend?" said Rajeev Dhawan of the Economic Forecasting Center at Georgia State University's J. Mack Robinson College of Business.

"Compared to the nation, there are more peaks and valleys in monthly job numbers, but a clear downward trend can be seen since the state's job growth rate peaked in the first quarter of 2015. This trend also is evident in neighboring and competitive states like Tennessee, Florida and North Carolina," Dhawan wrote in his quarterly "Forecast of Georgia and Atlanta," released today (Feb. 28).

Georgia's employment growth in the fourth quarter of 2017 was better than the national number.

In metro Atlanta, the construction sector saw a sharp moderation in job growth, which Dhawan attributed to the combination of a slowdown in multifamily activity and the completion of SunTrust Park and Mercedes-Benz Stadium.

"Residential housing permits trended lower in 2017 due to a 38.4 percent drop in multifamily housing permits, a trend we expect to continue until 2019," Dhawan said.

Moderation in the catalyst sector of manufacturing, due to the strong dollar and global economic weakness with trading partners in the Middle East, Latin America and China, has had a trickle-down effect on other sectors, such as hospitality and retail trade, hitting Dalton and Columbus particularly hard, he said.

Dhawan predicts manufacturing will improve in 2018 as the dollar is predicted to weaken this year.

Dhawan believes that capital spending will improve in these sectors and aid in job creation.

"These positive factors, domestic and international in scope, will help mitigate the moderating rate of growth in job creation we saw in the last 18 months," said Dhawan. "We predict a weakening of this moderating trend in job growth, which is the best we can hope for this late in the business cycle."

Highlights from the Economic Forecasting Center's Report for Georgia and Atlanta