Fifth Annual House of SpeakEasy Gala Brings Together Literary Luminaries and Philanthropists for an Evening of Celebrating Writers, Students, and Storytelling

On Monday, House of SpeakEasy Foundation, a literary nonprofit devoted to connecting writers and audiences, hosted the fifth annual gala, raising funds for their work in schools and communities in New York City and beyond. 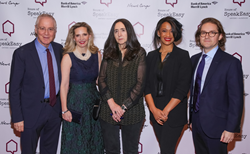 Monday’s House of SpeakEasy Foundation’s 5th Annual Gala, sponsored by NewsCorp and Bank of America Merrill Lynch, was a star-studded, red-carpet event which raised money to sustain the foundation’s charitable mission of supporting writers and inspiring the next generation of storytellers and artists.

The theme of the night was “Once More with Feeling,” which this year was hosted by Emmy Award winning TV and radio personality Faith Salie and featured performances by such literary luminaries as Ron Chernow (Alexander Hamilton; Grant), Francine Prose (Blue Angel), and Rachel Eliza Griffiths (Lighting the Shadow), while actor, musician, and composer, Postell Pringle performed a medley from the off-Broadway show “Othello: The Remix.” Students from House of SpeakEasy’s education initiative “SpeakTogether,” in partnership with Union Settlement’s College Readiness Program in East Harlem, read the excerpts from famous works as part of the quiz portion of the show, “Tip of My Tongue.”

Postell Pringle performing a medley from "Othello: The Remix" at House of SpeakEasy's 5th annual gala