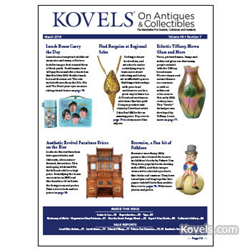 Vintage lunch boxes from the 1950s, ‘60s and ‘70s sold at a winter auction and are featured in a sale report in Kovels On Antiques & Collectibles March 2018 newsletter. More than 100 lunch boxes were offered that, no doubt, brought back many childhood memories. Prices started at $62 for a 1964 Hector Heathcote lunch box that had the original thermos. A 1954 Superman box without its thermos brought the highest price of more than $18,000.

More than 50 items from a single collection of “Brownies” sold at a doll auction in California. The mischievous fairy-like characters with big eyes and skinny legs were introduced in 1880s children’s books and magazines by Canadian author and illustrator Palmer Cox. Kovels’ March newsletter pictures Brownie figurines as well as a candy container, clock, stein and smoking set that all have Brownie decorations. And the Kovels encourage new collectors to look “in their own backyards” for local art and one-of-a-kind buys by focusing on an assortment of pottery and jewelry pieces made by Cleveland artists and found at a Cleveland auction.

When people hear the name Tiffany, silver, jewelry and those little blue boxes come to mind. Kovels’ March newsletter features early-1900s’ Tiffany glass that was auctioned in Boston. Pictured with prices are Favrile vases, the iridescent art glass made using a process developed by Louis C. Tiffany in 1894. See the top lot – a red Favrile vase with gold iridescent decoration – that sold for $33,210, and others. Kovels’ March newsletter also highlights furniture from the Aesthetic Movement, 1860s to 1890s, when makers favored squared lines and naturalistic decoration often based on Japanese art. A Connecticut auction recently sold pieces for prices ranging from $875 to just under $12,000. Kovels’ latest issue pictures useful examples with elaborate inlaid designs.