Pixel Film Studios, a global leader in the development of visual effects tools for the post-production and broadcast markets, announces the availability of ProIntro Halloween Volume 2 giving film editors access to both horrifying and spooky-fun animated titles for Final Cut Pro X projects. 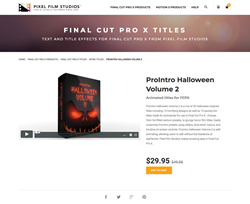 A new spooky-themed animated introduction is now available for FCPX!

Each ProIntro preset features unique texture and background controls that add additional customization effects to the introduction. With texture controls, users can add an intense grunge to create a nightmarish scene. Using the background opacity slider, users can lay ProIntro above pictures & images to create an ominous ghostly vibe. In addition, threshold color controls of the background elements are provided to multiple presets. Collectively, these controls create a completely horrifying atmosphere to any background.

The goal of the ProIntro series will be to efficiently generate spectacular introductions to effortlessly integrate into a user's project. By simply dragging a preset into the timeline above a picture or video file, users can then start crafting their own spectacular effects. Stylizing the scene and changing the text using parameter controls found in the inspector window will add even more customization options. With a few tweaks to the style and feel of the title, watch ProIntro Halloween Volume 2 come to life without having to set a single keyframe.

"By dropping one of the horror-themed presets into my FCPX project I was able to speed up my workflow and get to the true heart of editing my slasher-film!", says video editor Stephen.