COFES Institute Announces Ping Fu as a Keynote at COFES 2018

Technologist, Entrepreneur and Author to keynote at The Congress On the Future of Engineering Software (COFES) 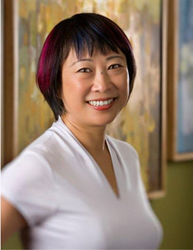 Resilient design and machine learning are two subjects I am focusing on now. Both of these topics are integral to this year’s COFES theme.

The COFES Institute is pleased to announce technologist, entrepreneur and author Ping Fu, as a keynote speaker at COFES 2018 in Scottsdale, Arizona, April 12-15, 2018 at the Scottsdale Plaza Resort. Ms. Fu has been a major contributor in the engineering software arena and is currently the Executive Chairman of Gelsight (gelsight.com).

The theme for COFES 2018 is Human-Aided Design: Changing the Relationship between Our Tools and Us. Ping will discuss the theme for COFES with a focus on machine learning and resilient design. The annual four-day event for the design and engineering software industry brings together a diverse group of thought leaders in technology and science to engage in wide-ranging and meaningful discussions. To request an invitation, visit apply.cofes.com.

“Ping is the ideal person to lead off COFES as the opening keynote,” said Vincent Caprio, COFES Institute President. "She has been part of the computing evolution for decades and more importantly has been an innovator in the engineering software space. I know she will provide a thought-provoking foundation for our theme.”

“Resilient design and machine learning are two subjects I am focusing on now,” said Fu. "Both of these topics are integral to this year’s COFES theme. Resilient design is not about designing something that never fails but designing with known failure characteristics that can be repaired very quickly. With this type of design process, you confront failure head on and incorporate it into the design. You anticipate failure and seek ways to rapidly address the failures. With machine learning, we can outsource part of our brain to machines, which perform certain functions better than humans. This frees up humans to do things that machines are not good at doing. I think the term machine learning is interchangeable with Artificial Intelligence.”

“I am really delighted to have Ping give our opening keynote,“ said Brad Holz, COFES co-founder. “Aside from the fact that she is truly a remarkable individual with an amazing history, she is also a true visionary for our industry and has much we can learn from.”

Ping Fu is a Chinese-American entrepreneur who grew up in China during the Cultural Revolution. Fu began studying journalism in China. Then she immigrated to the United States in 1984 and changed her studies to computer science. One of her first jobs was with Bell Labs when they were transitioning to packet switching. Later she then took the role of director of visualization at NCSA where she worked on the Terminator 2: Judgement Day. After which she co-founded Geomagic in 1997, a 3D software development company, and served as the chief executive officer until February 2013 when the company was acquired by 3D Systems Inc. At Geomagic, she was recognized for her achievements with the company through a number of awards, including being named Inc. Magazine's 2005 "Entrepreneur of the Year". Also, in 2013, she published her memoir, Bend, Not Break, co-authored with MeiMei Fox. At 3D Systems, she held the title of Vice President and Chief Entrepreneur Officer. Currently Fu, is serving as Executive Chairman at GelSight, Inc. (http://www.gelsight.com), a next-generation metrology company.

Now in its 19th year, COFES is the annual, invitation-only event for the design and engineering software industry. Widely recognized as a think-tank event, COFES (cofes.com) gathers design and engineering software leaders (vendors, users, press, and analysts) together to discuss the role engineering technology will play in the future survival and success of business. COFES is renowned for hosting leading keynote visionaries that provide a new perspective to the future of the industry. Apply for an invitation at apply.cofes.com.

The COFES Institute was created in 2017 to provide sustainable leadership to COFES. The COFES Institute is a non-profit 501c3 governed by a Board of Directors led by Vincent Caprio. Other members of the board are (in order of last name): Jim Brown: President – TechClarity, Jim Doxey: Product Configuration Manager – Oculus, Nathanael Miller: Aerospace Engineer – NASA Langley Research Center, Jason Preston: Co-Founder – Parnassus Group (DENT), and Rebecca Yeh: Event Director & Secretary – COFES. In addition, the COFES Advisory Board was established to provide industry input to the COFES Board, see the COFES website for a listing of the Advisory Board participants.