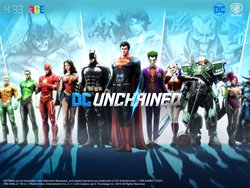 Pre-registration of DC Unchained can be made through its official Web page. It will be available exclusively in South Korea, Taiwan, Japan, Hong Kong and 9 other countries around Asia. Players who pre-register will garner a variety of exclusive in-game rewards for a much-appreciated edge.

Developed by ThumbAge and officially licensed by Warner Bros. Interactive Entertainment on behalf of DC Entertainment, DC Unchained is a collectible action role-playing game based on DC’s iconic characters and stories.

DC Unchained features a massive roster of DC Super Heroes and Super-Villains from which players can build dream teams of their favorite DC characters. It offers 30 playable characters, including Batman, Superman, Wonder Woman, The Joker and Harley Quinn. Each has his or her own signature moves, abilities and costumes. Players can learn how to combine the Super Heroes and Super-Villains to unleash skills and can challenge one another in action-packed gameplay modes.

DC Unchained is slated to be available in 2018.

ABOUT FOUR THIRTY THREE INC.
FourThirtyThree Inc. (4:33) is a mobile game publishing corporation. Founded in 2009, 4:33 received the first President’s Game Award among mobile titles with “Blade for Kakao.” Other titles such as “Three Kingdoms Blade,” “Hero for Kakao,” and “Lost Kingdom’ are also well-known hit titles. In 2016, “Monster Super League” launched in 136 countries, which demonstrated the global publishing capabilities of 4:33. In 2018, “Boxing Star”and “DC Unchained” are set for launch. For more information, please visit http://www.433.co.kr

About DC Entertainment
DC Entertainment, home to iconic brands DC (Superman, Batman, Green Lantern, Wonder Woman, The Flash, etc.), Vertigo (Sandman, Fables, etc.) and MAD, is the creative division charged with strategically integrating across Warner Bros. and Time Warner. DC Entertainment works in concert with many key Warner Bros. divisions to unleash its stories and characters across all media, including but not limited to film, television, consumer products, home entertainment, and interactive games. Publishing thousands of comic books, graphic novels and magazines each year, DC Entertainment is one of the largest English-language publishers of comics in the world.