VetStem Biopharma is Pleased to Share the Success Story of Ruger who was Treated with Stem Cell Therapy by Dr. Robert Pierce of North Idaho Animal Hospital

Ruger, a Labrador retriever, was successfully treated for osteoarthritis in both stifles with VetStem Regenerative Cell Therapy by Dr. Robert Pierce. 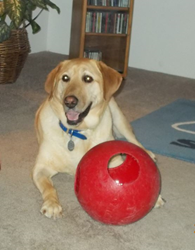 Happy Ruger With His Toy

We now have our beautiful smiling Ruger back

Ruger began limping before he was four years old. He was favoring his right rear leg so his owners took him to their veterinarian for examination. His initial diagnosis was hip dysplasia and arthritis in both stifles (knees). Ruger was prescribed Nonsteroidal Anti-Inflammatory Drugs (NSAIDs) as well as a human pain medication that is commonly used to treat pain in canines. His owners did not see improvement in Ruger’s pain level and after reading about the common side effects associated with his pain medications, decided to research alternative treatment options.

In March 2017, Ruger’s owner contacted VetStem Biopharma to request a list of veterinary stem cell providers in her area. She was given the contact information for Dr. Robert Pierce at North Idaho Animal Hospital and set up an appointment to have Ruger examined to determine if he might be a good candidate for VetStem Regenerative Cell Therapy. X-rays revealed that Ruger’s hips were fine however his knees did have some osteoarthritis. As suspected, his right knee, the one he was favoring, was much worse than his left. Dr. Pierce determined that Ruger was an excellent candidate for stem cell therapy and he was scheduled for the procedure one week later.

In a minimally invasive procedure, Dr. Pierce collected a small amount of fat from Ruger’s abdomen. The fat was shipped to the VetStem laboratory in San Diego, California where lab technicians processed the tissue and prepared injectable doses of Ruger’s own stem cells. The doses were shipped back to Dr. Pierce and 48 hours after his initial procedure, Ruger received the stem cell injections in both knees and also intravenously.

Following the stem cell therapy, Dr. Pierce recommended Ruger’s owners keep him quiet for a little while to allow the stem cells to do their job. His owners walked him on leash only and kept him from running or playing for at least one week. Slowly Ruger began to build up his activity level and pretty soon he was able to get back to some of his favorite activities including swimming and playing with his Labrador friends. His owners noticed no limping and said the pain in his eyes was gone stating, “we now have our beautiful smiling Ruger back.” They also noticed his muscle definition was better in his right knee than it was the summer before when he was limping and not using it as much.

In September 2017, about 6 months after Ruger’s stem cell therapy, Dr. Pierce recommended that his owners begin weaning him off of the NSAIDs. Now, just under one year after treatment, Ruger’s owners state the NSAIDs are all but gone. They were very pleased with Dr. Pierce and the outcome of his stem cell therapy and stated they would do it again in a heartbeat.

Stem cells are regenerative cells that can differentiate into many tissue types; they have been shown to reduce pain and inflammation, help to restore range of motion, and stimulate regeneration of tendon, ligament and joint tissues. In a study using VetStem Regenerative Cell Therapy (adipose-derived stem cells) in dogs with osteoarthritis of the hip joint, it was found that regenerative cell therapy decreased lameness and increased range of motion.

About Dr. Robert Pierce, DVM
Dr. Pierce holds undergraduate degrees in both Wildlife Biology and Fisheries Biology and Management from the University of Idaho. After graduating in 1983, he worked several years for the Idaho Department of Fish and Game. In 1990 he graduated from Washington State University's Veterinary Medical School. His professional interests include surgery (both orthopedic and soft tissue) and emergency medicine at North Idaho Animal Hospital. When he is not enjoying family life with his wife and two children he can be found playing either the guitar or ice hockey. He is happiest, though, riding his favorite horse through the wilderness and camping under the stars.