Graham Hughes, the world’s most traveled Liverpudlian, has released a book about his Guinness World Record™ breaking adventure to every country in the world without flying. 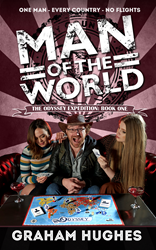 Man of the World

More than 4,000 people have scaled Mount Everest…
More than 500 people have trekked to the South Pole…
12 people have walked on the surface of The Moon…
But nobody had ever been to every country in the world without flying…
...before Graham Hughes hit the road!

“Man of the World: Book 1 of The Odyssey Expedition” is the gripping account of the first year of British adventurer Graham Hughes’s daring Guinness World Record™ attempt to visit every country on Earth using only surface-based transportation, told with refreshing candor in his own words.

Covering the first 139 countries & territories of The Odyssey Expedition, “Man of the World” is much more than a travelogue; it’s an epic tale of grit and humor, dizzying highs and crushing lows, a snapshot of the world seen through the eyes of a man who “eats impossible for breakfast”.

Readers join Graham as he rumbles through The Americas on increasingly grotty buses, hitchhikes around The Caribbean on a variety of unseaworthy vessels, speeds around Europe on insanely fast trains and then plunges head-first into Africa with only his backpack and his natural charm to protect him.

Which is probably why they locked him up in Cape Verde.

And again in Congo.

Getting a starred review from Kirkus doesn’t surprise publisher & editor, Jared Bendis. “I knew about Graham Hughes and The Odyssey Expedition long before we decided to publish him. His One Second Every Country video on YouTube has more than 1.5m views and it was easy to see that The Odyssey Expedition would be a compelling – and hilarious – tale. Considering it took Graham over 4 years to visit all 201 countries, we knew it was simply too much for one book and he agreed to make it a trilogy.”

For Graham The Odyssey Expedition was more than just a quest to see the world or set a some records. He calls it “...a rib-tickling multinational caper of courage, tenacity, love, friendship, danger, panic, passport stamps and geopolitics, washed down with copious amounts of alcohol.”

“Man of the World: Book 1 of The Odyssey Expedition” By Graham Hughes
Softcover | 5x8in | 332 pages | ISBN 9781626130814
Available at Amazon, Barnes & Noble, Ingram, and wherever adventurous book are sold.
E-book available for Kindle, Nook, and iBook.

Graham Hughes is an author, presenter and filmmaker from Liverpool, England. He’s been called “The Thinking Woman’s Indiana Jones”, “The World’s Most Adventurous Man” and “Bill Bryson for the Millennial Generation”.

He is the only person to have visited every country in the world without flying. While on his journey he presented the travel series “Graham’s World”, which was commissioned by National Geographic, produced by Lonely Planet, distributed by BBC Worldwide and broadcast in over 50 countries around the world.

After his record breaking expedition, he won a tropical island on a game-show, subsequently spending the next few years living there off fish and coconuts. Graham has now returned to the UK to help inspire the next generation to get out there and see the world for themselves.

Graham is available for speaking engagements, book signings, and other adventures when called upon.

ATBOSH Media Ltd. is an Agency Press in Cleveland, Ohio that publishes emerging and mid-career authors in almost any genre or subject. As an agency press, they also serve as the literary agent for both the book and its derivative works (such as television and film productions).