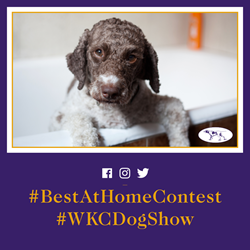 Working closely with Westminster and broadcast partners, our team offered compelling second-screen experiences for younger fans to connect with the show and celebrate special moments for the dogs and their handlers. -- Howie Kleinberg, GLOW President

Through strategic social efforts and key partnerships, GLOW and Westminster grew the audience for the second-oldest sporting event in modern history by more than 15,244 new social followers, while maintaining the dog fancy core audience. Fifty-three percent of Westminster’s Instagram audience and 34% of Westminster’s Facebook audience are millennials. The Westminster Giphy page alone has received more than 106 million views.

“GLOW has been the driving force in helping us bring the excitement and passion that is Westminster to dog lovers globally,” said Gail Miller Bisher, Director of Communications for the Westminster Kennel Club. “Their understanding of the social landscape, and ability to manage and turn a very complex and dynamic live event into such stellar results, has positioned Westminster well for even more future growth.”

GLOW's community management team worked around the clock to develop hundreds of pieces of real-time social creative content on-site from the event, leading to over 44 million impressions in five days and unprecedented engagement rates for the Westminster Kennel Club.

“We are proud of our continuing role in helping the Westminster Kennel Club expand the excitement of its time-honored dog show,” said GLOW President Howie Kleinberg. “Working closely with Westminster and broadcast partners, our team offered compelling second-screen experiences for younger fans to connect with the show and celebrate special moments for the dogs and their handlers.”

Sarah Pine, GLOW Associate Director, Social and Digital Strategy, who led the Westminster campaign, added: “Our team collaborated with our client and partners to develop and carry out a robust combination of social activations, reaching younger fans across multiple social channels. It was rewarding to have a tangible impact – for Westminster, as well as dog lovers new to the show.”

GLOW is an award-winning social, digital and creative agency based in New York City. With an 18-year history as a leader in the digital space, GLOW provides innovative social strategies and best-in-breed executions for a range of clients considered the most successful in their industries, including HBO, Hulu, I Love New York, VH1, and IFC. Our passionate, collaborative culture and breadth of integrated capabilities provide our client partners with strategies and campaigns that solve key business problems and generate measurable results.