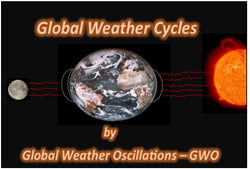 some United States zones and the Caribbean Islands are currently in their strongest hurricane landfall cycle in 40 to 70-years.

GWO is reacting to the requests by instituting 2018 hurricane prediction zones for the Lesser Antilles – the Eastern Gateway for storms entering the Caribbean. GWO’s Zone 15 includes the Leeward Islands group that encompasses the Virgin Islands southward to the Island of Dominica. Zone 16 includes the Windward Islands from Martinique south to Tobago and Trinidad. Predictions will be available March 12th and can be acquired at GWO 2018 Hurricane Landfall Predictions and Webinars.

Professor David Dilley – Senior Research and Prediction Scientist for Global Weather Oscillations (GWO) – not only predicted that 2017 would be the most destructive and costly hurricane season since at least 2005 – but also predicted where the storms would make landfall (Texas above Corpus Christi – south tip of the Florida Peninsula – Eastern Louisiana to Alabama). GWO has consistently released the most accurate preseason and landfall predictions by any organization during the past 10-years

(which includes the Caribbean Sea and Gulf of Mexico)
Professor David Dilley says that “some United States zones and the Caribbean Islands are currently in their strongest hurricane landfall cycle in 40 to 70-years. This is a Natural ClimatePulse Cycle that produced extremely active and dangerous hurricane conditions in some zones back in the 1950s and 60s in the Lesser Antilles – and in the 1940s in the United States.

The reason for another destructive hurricane season is 3-fold. Although ocean water temperatures have cooled across the Eastern Atlantic - the water temperatures continue to run warmer than normal from just East of the Lesser Antilles and especially in the Caribbean region and the Atlantic near the United States. This is very similar to the ocean temperatures of last year, and this will again be conducive for tropical storms and/or hurricanes forming and/or strengthening near the Lesser Antilles and close to the United States. Mr. Dilley also expects ENSO Neutral Conditions (no El Nino) that are conducive for active seasons, and the Bermuda-Azores High Pressure Center will again be in a favorable location – thus allowing more named storms to strengthen as they move east into Caribbean region and toward the United States.

By utilizing ClimatePulse-Technology developed by Professor David Dilley, GWO issues very accurate preseason hurricane landfall predictions well before the beginning of the hurricane season. The model is based on natural rhythm cycles that control climate cycles and hurricane landfall cycles.

Global Weather Oscillations offers 3 levels of predictions – ranging from Basic to the Advanced Prediction that includes weekly outlook webinars and daily tracking webinars when a storm is likely to pose a threat to one of our prediction zones. By incorporating GWO’s preseason zone predictions for landfalls into our tracking webinars – GWO has the ability to provide much more lead time for storm preparation and safety.