“Awesome Parents Awesome Kids: A Success Story on Becoming an Awesome Parent and Raising Awesome Kids” from Christian Faith Publishing author Donald Whitmore teaches parents all they need to become awesome parents. By answering the most pressing questions about parenting in the modern age, parents will learn how to raise amazing kids. 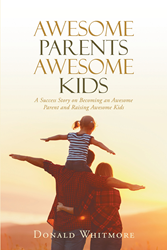 “Awesome Parents Awesome Kids: A Success Story on Becoming an Awesome Parent and Raising Awesome Kids” is the creation of published author, Donald Whitmore, Pastor of True Gospel M. B. Church and public school teacher of twenty three years. Born in a small town in rural West Tennessee, Donald learned about respect, reverence, and relationships from his strong family foundation. His childhood was filled with love, discipline, hard work, and sacrifice. His humble beginnings served as a great pillar of strength well into his later years. It has been a tremendous pleasure for him to work with a massive number of children and families from all walks of life. He now has a wife and kids of his own.

“For the newly married couple that is planning their life with kids someday or the new parents in the infant ward of the hospital, even the established family or parents looking for a better way, you may be asking the questions, how do I raise my children in this day and age? What is acceptable and what is not? What are the best strategies and techniques to deal with my toddler?” --Donald Whitmore

The United States has been called the “Great Melting Pot” due to the highly diverse origins of the American People and their ancestors. It is undeniable that the United States has become less homogeneous throughout the years. As the population has grown, immigrants have retained less and less of their traditional lifestyles while ethnic groups have had to embrace an increasing number of cultural differences and values. This expansion, along with the lack of commonalities and shared traditions, has made educating such a diverse population detrimentally complex.

Parenting norms and expectations for youth have steadily been on the decline. Things that once worked no longer have a constructive impact on the youth of today. Times have changed, so have parents and their children. For the newly married couple planning to have kids someday, the new parents, and the established parents looking for a better way, “Awesome Parents Awesome Kids” offers guidance. “Awesome Parents Awesome Kids” follows the journey of one father and husband to reveal the secret to raising awesome kids.

For additional information or inquiries about “Awesome Parents Awesome Kids: A Success Story on Becoming an Awesome Parent and Raising Awesome Kids”, contact the Christian Faith Publishing media department at 866-554-0919.