Gender Inequality in Film: An Infographic From the New York Film Academy

The New York Film Academy commemorates March, the month of Women’s History Month and International Women's Day, with updates to its viral infographic on the state and history of women in film. 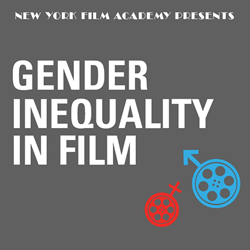 “With all that’s happening in the film industry, the New York Film Academy hopes to contribute what we can to the conversation with this infographic,” explains NYFA Chair of Documentary Andrea Swift.

Joining the conversation about women in the entertainment industry, the New York Film Academy (NYFA) updates the infographic that elicited a widespread conversation on the history and current state of women in 2013 for today's discourse. You can view the full infographic on their site.

“With all that’s happening in the film industry, the New York Film Academy hopes to contribute what we can to the conversation with this infographic. It can be used as a reference and an educational tool to raise further awareness and inspire leaders within the entertainment industry, and beyond,” explains NYFA Chair of Documentary Andrea Swift. “It is an accessible way to interact with key information to support the movement to reach 50/50 by 2020.”

With movements like TIME’S UP™ a fixture of this awards season, and rousing speeches like that of Frances McDormand – who called for her peers to utilize Inclusion Riders as a vehicle for change toward industry equality at the 90th Academy Awards – there is a renewed focus on the disparities in pay and representation for women in the entertainment industry. Research, such as the information presented in NYFA’s Gender Inequality in Film infographic, reveals the realities behind this cultural conversation around inclusion in film.

To further support this conversation, NYFA will host events throughout Women’s History Month, with a focus on International Women’s Day on March 8th, across their various campus locations. The celebrations kick off in Los Angeles with an industry panel that features CMO of Variety Dea Lawrence, Sr. VP Marketing at Warner Bros. Kelly Gilmore, and 3-time Emmy-winning actress Barbara Bain, among others. Other events include film screenings and a raffle for tickets to the Women’s International Film & Arts Festival. For more information on these events, click here.