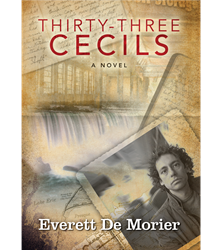 Everett De Morier; A Funny Way of Looking at It

It’s not unusual for artists and performers to donate creative work. Many first-time authors have been known to offer free e-books in order to create a fan base and gather positive book reviews. It’s also common for musical performers to offer free downloads for fans to gain exposure and build a following.

Everett De Morier is an American author whose first novel won the top fiction prize at the London Book Festival in 2015. His book Thirty-Three Cecils is now required reading in at least one New York high school and his screenplay is in multimillion-dollar film development. But he has a new theatrical play coming out, and as he has done with the seven other plays before it, he will find a nonprofit theater to give it away to.

“I was asked to write a play almost ten years ago because a local theater group couldn’t find anything that hadn’t been done a thousand times or wasn’t beyond their budget,” De Morier says. “So I wrote one, helped direct it, and we had a great time filling the place.”

De Morier wrote six more original plays for Cornerstone Drama of Dover, Delaware. In between, he completed his novel, wrote a screenplay, and created an online magazine. But he always returned to writing for the stage, which De Morier says continues to see dwindling audiences.

“The challenge with live theater today is, that on one end of the spectrum you have the glitzy multimillion-dollar Broadway performances that we are more than willing to shell a hundred dollars out for a ticket. And on the other side, we have the small community theater, where we are reluctant to pay the twenty-dollar ticket price. The reason for this is often an entertainment value decision. We can go see another version of Death of a Salesman at community theater, or for half that cost we can go see the first-run film of Black Panther.”

De Morier goes on to explain that small theaters often produce the plays that they can, rather than the ones they want to. And the plays they can are often the ones that have lower minimum costs per performances, which are well written but have been done and redone for decades.

“Here’s the challenge,” says De Morier. “For years we have marketed to live-theater audiences differently than film audiences. Film audiences want to see new films, new titles, new twists. But we expect theater audiences to keep coming back to see Cat on a Hot Tin Roof, just because we’re performing it again. Why?”

De Morier explains that for a new generation of live theater consumers there is the risk of each performance. Each stage performance could be untested, untried, and therefore not worth the risk of the cost of two movie tickets. Therefore a low cost domain script is safer for a theatre company because it can get that smaller but more faithful audience.

De Morier plans on continuing to create new and original scripts and make them available for nonprofit theaters for free, if for no other reason than to give these organizations another option to perform.

“So a small theater can go with The Glass Menagerie or they can try something brand new. They now have a choice.”

Everett De Morier is currently completing his latest play, Binghamton Lydia, which he will donate to community theaters this summer.