Same-sex couples who are considering gay surrogacy to conceive their families should examine the serious risks of unregulated programs overseas, said Bill Houghton, founder of the Sensible Surrogacy Guide. 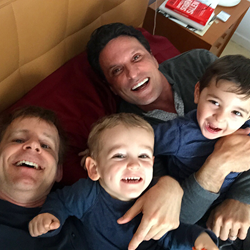 In a culture where homosexuality is considered an illness, it’s quite realistic that the surrogate may decide she’d rather keep the baby than give custody over to a gay couple.

As same-sex couples increasingly look for options to conceive children, many are choosing programs in countries without basic protections, according to Bill Houghton, founder of the Sensible Surrogacy Guide. Some destinations popular with gay couples have no specific legislation on surrogacy. This opens the door to unregulated programs with serious risks.

An unregulated surrogacy program is just a private agreement between the Intended Parents and the surrogate. If there is any dispute, the contract has no legal weight and can’t be enforced.

Same-sex couples often have few options to conceive their families. Most countries with explicit legislation specifically deny surrogacy for gay couples. Other countries like the United States, where laws in surrogacy-friendly states are more open, are prohibitively expensive. As a result, gay couples are often forced into programs with no protections and possible serious consequences, Houghton warns.

The Sensible Surrogacy consultancy has recently published it's 2018 update of gay surrogacy options worldwide. Included are list of popular destinations, and the general risk of each.

“Most importantly, there are no legal protections for the parents if the surrogate should change her mind and request custody of the baby,” says Houghton. “This is a real issue in some religiously conservative countries, like Mexico or Kenya.”

“In a culture where homosexuality is considered an illness, it’s quite realistic that the surrogate may decide she’d rather keep the baby than give custody over to a gay couple,” Houghton says. “Any custody dispute would be resolved in local family court, and without legal protections gay couples will be left out in the cold.”

In addition, some conservative countries may decide to treat commercial surrogacy as a form of Human Trafficking. In Southeast Asia the conservative governments decided to use existing anti-trafficking laws to suddenly ban surrogacy without any legislative process. “We literally saw surrogacy procedures that were legal one day, suddenly they carried stiff criminal penalties the next day,” says Houghton.

Local governments don’t necessarily need to debate or consider the consequences of any surrogacy legislation. The lack of a legal framework opens the possibility of sudden and draconian actions on the part of conservative elements within the local government – without any input from surrogacy-friendly voices.

Houghton recalls the efforts he and his team spent in rescuing gay couples and their newborn babies from brutal restrictions that came from nowhere in Southeast Asia. "We basically closed up shop for a full year while we struggled to bring all of our clients home with their babies. We even helped clients of other agencies that had abandoned them overseas."

According to Houghton, there may be some steps that same-sex couples can take to protect themselves. But pursuing surrogacy in a conservative and unregulated destination will always pose some risk.

“We always recommend that gay couples conceive their children in friendly countries like the United States,” says Houghton. “But if that’s not an option, then couples should tread lightly, and look carefully at exactly how their chosen program will protect their rights.”

Sensible Surrogacy is an ethical IVF & surrogacy consultancy and publisher of the Sensible Surrogacy Guide, which is a definitive source for how surrogacy works for same-sex couples. Since 2012 they have advocated for affordable, complete and ethical surrogacy services through their international consultants and a network of medical and legal service providers.