Award-winning entrepreneur and philanthropist Nina Vaca was given the proclamation before being named Woman of the Year by the magazine Solo Mujeres. Sixteen other Latinas were also honored in multiple categories in commemoration of International Women's Day. 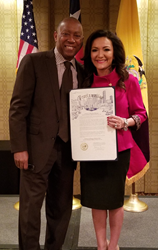 Houston Mayor Sylvester Turner proclaimed March 8, 2018 Nina Vaca Day at the 11th annual Tribute to the Hispanic Woman, organized by the newspaper Sucesos and the magazine Solo Mujeres. The mayor surprised Vaca with the recognition before she was named Woman of the Year by the publications, which hosted the event in commemoration of International Women's Day.

“The city of Houston commends and congratulates Nina Vaca on this momentous occasion and extends best wishes on her continued success, and therefore I, Sylvester Turner, mayor of the city of Houston, hereby proudly proclaim March 8, 2018 as Nina Vaca Day,” Turner said.

Vaca is the Founder, Chairman and CEO of Dallas-based Pinnacle Group, one of the largest Latina-owned workforce solutions providers in America. The daughter of Ecuadorian immigrants, Vaca returned to her mother’s adopted hometown for the celebration, which honors the accomplishments of women who have broken barriers, become proven entrepreneurs, committed themselves to the community and set the course for future generations.

Since founding Pinnacle Group in her mid-20s, Vaca has strategically developed it into the powerhouse that it is today, earning it a ranking as the fastest-growing women-owned/led company in the nation by the Women Presidents’ Organization in 2015, as well as being named among the top two in 2016 and 2017.

Vaca also serves on the board of directors of three publicly traded companies. She has been a strong advocate for more women in the C-suite and at the boardroom table through the At the Table: Women in Business and Leadership initiative that she founded. The program is housed at the United States Hispanic Chamber of Commerce (USHCC) Foundation, which Vaca serves as Chairman of the Board of Directors. As a dedicated civic leader and philanthropist, Vaca works tirelessly to expand opportunities for Hispanics and women in business, and most recently to expand opportunities in STEM fields for women and girls. In 2014, Vaca was appointed as an inaugural member of the Presidential Ambassadors for Global Entrepreneurship program and in that capacity, has traveled extensively to inspire entrepreneurs worldwide. Last year, she created the Nina Vaca Foundation and also launched her own website, NinaVaca.com, as a resource and source of inspiration for entrepreneurs.

“It is such an honor to receive this award from two publications that are at the heart of Houston’s Latina community,” Vaca said. “I’m constantly reminded that nobody does anything alone. That’s why this recognition belongs to the many women who have blazed trails before me and made a difference in their own backyards. They inspire me to do the same.”

The luncheon at the Four Seasons Hotel celebrated the important roles and contributions these women have made in the areas of politics, entrepreneurship, education, culture, arts, mass media, science and sports.

Vaca used the platform as an opportunity to help other Latinas grow in their industries. After Vaca received her award on stage, she presented Solo Mujeres’ nonprofit, the LatinWE Foundation, with $11,000 raised by the Nina Vaca Foundation in honor of the 11th annual Tribute to the Hispanic Woman. Thanks to the 75 people who contributed to the fundraising campaign, deserving Latinas will receive more of the tools they need to grow their businesses or to advance their careers, helping to propel their families and their communities forward.

“Nina Vaca is the epitome of a leader both in business and civic life, who makes it her mission to invest in the community with every decision she makes,” Lizzette Diaz, Executive Director of Penta Communications, said. “She has not only inspired women in Texas and around the world, she has paved the way for the next generation of women leaders to find success in whatever they choose to do.”

About the Nina Vaca Foundation

The Nina Vaca Foundation supports community-building in underserved populations locally, nationally, and globally, primarily through education and entrepreneurship, as well as through home-building and infrastructure development. We are particularly committed to creating brighter futures for women and minorities through STEM education and careers and we are passionate about helping inspire and grow the next generation of entrepreneurs globally. We believe that when you build and support local businesses, you build and support entire communities. For more information, visit http://www.ninavaca.com.