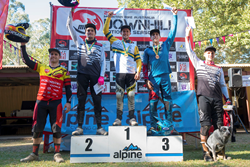 I’m beyond excited to get the win this year after losing the National Champs sleeve last year, and was hungrier than ever to get it back this year - Troy Brosnan

In typical dusty conditions Australian riders have come accustomed to, the 2018 Downhill National Championships were no different. Bright is a steep technical track that winds its way down through the pines. The track took a beating from the 240 plus riders competing during the weekend making the conditions even trickier, and track conditions changing hourly.

With the tough conditions, Brosnan had picked up a flat tire in his qualification run forcing him to be the first rider down the hill for the finals. He had a pretty clean run down in the finals setting a time of 3:46:78, but didn’t know if the time would hold up. Brosnan then sat in the hot seat watching as the remaining 58 elite men’s field dropped into the finish arena attempting to best his time. In the end, Brosnan managed to hang on as each rider’s attempt fell short and secured his 5th Australian National Championship.

“It was tough out there with everyone riding so fast, and getting a flat in my qualifying run didn’t give me a good gauge as to what time would be good in the finals,” said Brosnan. I’m beyond excited to get the win this year after losing the National Champs sleeve last year, and was hungrier than ever to get it back this year. The racing was also so tight between me and Jack Moir - separated by only .09 seconds and I’m excited to see what the World Cups bring.”

Monster Energy’s Connor Fearon took a crash early in practice splitting his elbow open and had to get stiches. Even with a flat tire toward the finish, Fearon would go on to power to 8th place in the finals.

Watch for both Brosnan and Fearon this season along with other Monster Energy athletes as they compete for the UCI World Cup Series Title kicking off in Croatia April 20-22.