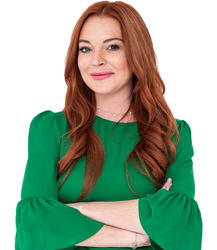 "I've used Lawyer.com for business ventures and found the response time and Lawyer selection amazing. Calling or completing a form is so simple and it's free!"

Actress and activist, Lindsay Lohan, has teamed up with Lawyer.com​ to help consumers access quality legal services. For many consumers, navigating the complexities of various types of law is challenging and connecting with qualified lawyers is nearly impossible. Lohan is working with Lawyer.com to help raise awareness and connect people in ​challenging circumstances with top local lawyers. Since its founding in 2009, Lawyer.com has focused on building advanced matching technology and a team of specialists who guide inexperienced consumers to successful lawyer matches.

"We ​already help​ thousands o​f​ consumers each week, but millions more could use Lawyer.com to avoid the frustration ​of ​antiquated lawyer search methods" said Gerald Gorman, Lawyer.com CEO. "With Lindsay's help, ​many more consumers can delight in the ease and speed of our services. Our team is already benefiting from Lindsay's world class experience ​​and ​​we have many exciting plans for the 12 month engagement."

Lohan commented, “I'm excited to work with Lawyer.com because I know how hard it is to find quality legal help and this is a great opportunity to help people in need.” Lohan shared her own experience with the platform, commenting, "I've used Lawyer.com for business ventures and found the response time and Lawyer selection amazing. Calling or completing a form is so simple and it's free!"

​Lohan is Lawyer.com's exclusive spokesperson during the 12 month engagement and will also act as marketing and brand advisor. Each month she ​will ​meet​ ​and brainstorm with Lawyer.com management on new strategies to raise Lawyer.com's awareness including producing compelling content, connecting to media leaders, and launching ​fun videos and commentaries to Lohan's 20 million social followers. ​ In return for her extensive commitments to the success of Lawyer.com, Lohan's compensation includes a substantial ​stock ​option ​interest in the company.

Starting out as a Ford model at age 3, Lohan has over 20 years of global success as an actress, singer, writer, entrepreneur, and advocate. Her starring roles in iconic movies including Parent Trap, Freaky Friday and Mean Girls have made her one of the world's most recognized personalities across all demographics and from teenagers to grandparents. Lindsay co-wrote two music albums which earned platinum and gold status and her song 'Rumors' sold over 500,000 copies. She directed the widely acclaimed music video for ​her song, ​'Confessions of a Broken Heart ' ​which she performed at the American Music Awards. Lindsay made her stage debut on London's West End in Speed-the-Plow, has performed on stage with the band Duran Duran and currently performs in and co-writes the UK sitcom, Sick Note. Her entrepreneurial activities include the mobile game 'The Price of Fame', Club Lohan in Athens, a cosmetics line, a clothing line, and the lifestyle site Preemium. She is a long time advocate of drug abuse causes and women's' rights. This April she is co-producing and appearing in the all women production 'Frame' to be filmed in Saudi Arabia.

Lawyer.com is a leading Lawyer matching service and online lawyer directory. Since its founding in 2009, Lawyer.com has been a leader in opening up Lawyer access to more consumers. Our service is the fastest of major Lawyer directories, was the first to adopt advanced security measures, first to accept bitcoin payments and maintains a database of nearly 2 million licensed lawyers in the U.S., Canada, the U.K. and 50 additional countries. Lawyer.com's main offices are in Basking Ridge, NJ, and Easton, PA.