Renewvia will connect up to 4,000 homes and businesses in Kenya from 13 different sites in 2018. 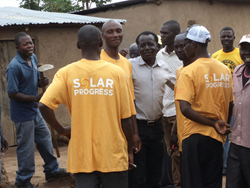 Renewvia Energy is helping underserved communities and businesses in rural Kenya access the energy they need to improve their lives and bolster their economy. Renewvia is building a network of solar microgrid stations that will provide clean, efficient, and affordable energy on a pay-as-you-go basis.

In January, Renewvia began construction of three sites in Kenya and it plans to complete an additional ten sites this year. Renewvia will connect around 4,000 homes and businesses in 2018. The sites are in multiple counties from Lake Victoria all the way to the Indian Ocean.

Renewvia is personally investing in the pay-as-you go network, while also in discussions with institutional capital sources to explore conventional financing structures for this new unsecured prepaid individual subscriber model.

Renewvia’s progress is due to its strategic partnering with both the U.S. Trade and Development Agency’s (USTDA) Power Africa initiative and community and government agencies in Kenya. As a U.S. backed contractor, Renewvia conducted a year-long solar microgrid feasibility study in 2017, talking to all stakeholders and community members at length about their needs and concerns.

"Conducting solar feasibility studies at this level provided our company specific and unique insight otherwise unobtainable in any commercial manner,” said Trey Jarrard, CEO of Renewvia. “The knowledge from the effort will allow for a scalable off-grid power solution for multitudes of Kenyan communities without requiring large upfront purchases and ongoing power asset management associated with individual solar kits.”

Pam Onyanyo, Director of Sub-Saharan Africa for Renewvia, applauded the role of the USTDA. “The contribution from the USTDA at the onset of this development effort was critical and we are thankful for this partnership. It expedited the development of a financeable investment-grade product that will yield returns for both Kenyans and U.S. solar product manufacturers.”

ENERGY IN AFRICA
Renewvia’s interest in Kenya is part of a global push for energy investment and development in Africa. More than 70 percent of the continent lacks access to reliable power, according to the United States Agency for International Development (USAID), making the market an important humanitarian cause and a ripe and untapped energy market. Power Africa’s Annual Report 2017 notes that each percentage point in GDP growth in developing countries is typically accompanied by a new energy demand of 1.2 to 2.3 percent. Between 2015 and 2040 the population of Sub-Saharan Africa is expected to grow by 755 million or 81 percent. Electricity generation will have to almost double by 2040 to maintain per capita provision.

NEW EMPLOYEES AND LOCATIONS
Multiple projects abroad and in the United States are contributing to rapid growth for Renewvia. The company added many new employees in 2017, both at the home office in Atlanta and at its locations in Nairobi, Kenya; Lagos, Nigeria; and Jinja, Uganda. In Atlanta, Renewvia welcomed Amy Carabajal as its new Director of Special Projects, Praveen Jha as its new Project Development Director, Mitchell Butler as its Technical Services Manager, and Douglas Cox as its Director of African Project Development.