Firefallmedia signs Simon Sitwell for an autobiography in novel form, of the last family to live in Barmoor Castle. 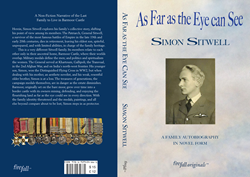 Coming in October, As Far as the Eye Can See, by Simon Sitwell, from firefallmedia

The last family to live in Barmoor Castle is a fascinating and true story, revealing the End of Empire in all its irrationality.

Edith’s godson, Simon, belonged to a unique branch of the Sitwell Dynasty. His father, a Brigadier-General who fought successfully for 50 years to expand the British Empire, and Conty Sitwell, a spiritualist and lyrical novelist but hopeless as a mother, left a 60 room castle and an estate in Northumberland that extended as far as the eye could see. In spite of Simon’s Distinguished Flying Cross for 100 missions as a fighter pilot in WW2, and his successful career in association with Lloyd’s maritime interests, he finds himself at a loss in dealing with his older brother’s lack of will and talent and abject submission to actresses. Whether Simon, as a second son, can preserve the family and its lands, keep alive their historic presence, and reweave the very elements that define family is the substance of this book, a fascinating and true story, revealing the End of Empire in all its irrationality.

The political inflexibility of the 1950s and 60s in the UK denied Simon a career as a writer, and he died early, the year after Lloyds collapsed. His autobiography emerged with his young widow, a conservator for the British National Trust, who also helped rediscover a Rembrandt and is now on the trail of a Titian.

As Firefallmedia is publishing Simon’s cousin, Mary C Gladstone and her autobiography about her childhood in Scotland ("The Moss of Cree", launching simultaneously in the US and UK in June), it’s appropriate for Simon, with his clear-sky abilities, to follow her into the literary spotlight. All books are available for pre-order on the firefallmedia.com website.

Firefallmedia is a boutique California publisher with a branch in Scotland and a dozen series, including Science Fiction by Scientists, Libido Beach, Violet Headmess, Mr. Blot, the Highland sea, Masters of Vision, the Cult of the Counter-Culture, World War Two Memoirs, and the Pseudonymous Series. Run by Robinson Joyce and Kathryn Delappe, managing partners, as the penthouse of the real and imagined, Firefallmedia is pursuing a New World idiom: “We’ve applied for the trademark,” Robinson says happily.

"Inheritance, the Abattoir of Wonder", the fifth book in Firefall’s Mysteries of Fortune series, will launch later this year as well. Also coming soon is Wayne Pinger’s second book in the Angels in Alaska series. Mass market rights will be auctioned in September. The company welcomes inquiries.

The 2nd book in the Highland Sea series, from Firefallmedia

The Second in the Angels in Alaska Series, by Wayne Pinger, from Firefallmedia