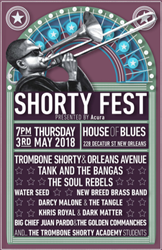 The sixth annual Shorty Fest presented by Acura, a benefit concert for the Trombone Shorty Foundation, will fill two stages at the House of Blues New Orleans with an incredible lineup of leading jazz, blues, funk, rock and soul artists on Thursday, May 3, 2018 – in between the two weekends of the New Orleans Jazz and Heritage Festival. Tickets are on sale today:

Headliners TROMBONE SHORTY AND ORLEANS AVENUE will be joined by a stellar lineup, including TANK AND THE BANGAS, SOUL REBELS, NEW BREED BRASS BAND and a special performance by the Trombone Shorty Academy students.

Ticket pricing ranges from $80 general admission, $250 VIP tickets, which include an open bar, access to the VIP balcony, and access to the iconic House of Blues Foundation Room. A limited number of Patron tickets, at $500, include the perks of VIP tickets plus reserved seating in the Loge section of the venue, which offer incredible views of the stage.

Shorty Fest 2018 Presented by Acura is the largest fundraiser of the year for the Trombone Shorty Foundation, which supports New Orleans’ young musicians with music education, instruction, mentorship and performance opportunities. Founded by Troy “Trombone Shorty” Andrews in 2013, the Foundation inspires and prepares the next generation of New Orleans musicians, by developing their talent and connecting them to the city’s unique musical heritage. As an annual sold-out-event, Shorty Fest has built a reputation as a showcase for Academy students and up-and-coming musicians and honoring the mission of mentorship that is at the heart of the Trombone Shorty Foundation.

“The sixth annual Shorty Fest is the place to celebrate leading acts, local superstars and the next generation of New Orleans musicians, the Trombone Shorty Academy students,” said Troy “Trombone Shorty” Andrews. “We make music careers a reality -- allowing kids to pursue their dreams, with the help of incredible music education programs, mentors, and performance.”

ABOUT THE TROMBONE SHORTY FOUNDATION
Founded by renowned New Orleans musician Troy “Trombone Shorty” Andrews in 2013, the Trombone Shorty Foundation is Andrews’ vision of sharing his passion to inspire the next generation by developing their musical talent and connecting them to the city’s unique musical heritage. Frontman of the band Trombone Shorty & Orleans Avenue, Andrews credits the support of his own positive role models in the rich New Orleans music community for helping him make his way into the world of music, where he has grown into an internationally recognized, Grammy Award-nominated artist.

Currently in its sixth year, the Trombone Shorty Academy partners with the New Orleans Jazz and Heritage Foundation to perpetuate the musical heritage of the region, by teaching local high school students homegrown New Orleans music—from brass band and traditional jazz to more modern funk and rhythm & blues styles, all of which play an integral role in the richness and depth of New Orleans’ musical legacy. For more information on the Trombone Shorty Foundation, please visit: http://www.tromboneshortyfoundation.org.

About Acura
Acura is a leading automotive luxury nameplate that delivers Precision Crafted Performance, representing the original values of the Acura brand – a commitment to evocative styling, high performance and innovative engineering, all built on a foundation of quality and reliability.