If Rudy Project athletes were their own country, Rudy Nation would be fourth overall in medal count & fourth in gold. 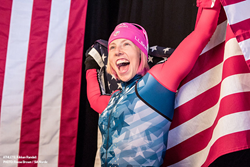 Rudy Project North America, exclusive distributors of Italian-made sunglasses, and the thirty distributors of Rudy Project around the world celebrated the achievements of the global roster of athletes that won two dozen medals in South Korea this past February. All in all, Rudy Project athletes the world over won 25 medals total, with 10 gold, 11 silver, and 4 bronze medals across multiple disciplines. If Rudy athletes were their own country, the total would have made Rudy Project the fourth ranked nation in terms of total medal count. More impressive, Rudy Nation would have edged out the United States, Netherlands and South Korea for total number of gold medals for a spot at number four.

“Watching our athletes compete on the global stage was the highlight of my year,” said Paul Craig, Co-CEO and Co-Founder of Rudy Project North America. “History was made, and seeing how hard they work to get there, and how they put their all into it – makes me proud we’re part of such a strong global brand that’s dedicated to elevating the performance of the world’s best athletes.”
Over 65 athletes sported Rudy Project’s technically cool eyewear and helmets, heralding from Norway, Italy, United States, South Korea, Canada, and Estonia, to name a few. Rudy Project sponsored athletes competed in a number of winter disciplines, from biathlon to combined Nordic, cross country skiing, speed skating, and freestyle snowboarding.

“We have a long history of doing exceptionally well on the global stage,” said Simone Barbazza, Global Marketing Director for Rudy Project. “In 2006, when Italy was the host nation, our athletes took home 45 medals in all, which was 16 medals more than the entire country of Germany, who topped the medal count. For more than 30 years, we’ve worked with athletes and invested in technological research and development of high end optics and materials for the most talented athletes in the world.”

Rudy Project has a tradition of elevating the performance of winter athletes around the globe. Speed skater Ted Jan Bloeman, who took two medals home to Canada, came into the world-class competition fresh from claiming the world speed record in the 50k distance. Cross country skiing athletes Jessie Diggins and Kikkan Randall took a historic win during the team sprint free event, claiming gold by a hairsbreadth ahead of the Swedish team they had been dueling the entire 7.5 km relay. Their overjoyed faces after the win said it all – together Diggins and Randall had managed to end a four-decade long drought for the United States – the last cross-country medal won by the USA came in 1976, a silver medal claimed by American Bill Koch.

Rudy Project athletes claimed success in plenty of other arenas – Italian speed skating legend Arianna Fontana took gold in the 500m distance and lead her Italian teammates to claim silver in the 3000 m relay. South Korean athlete Alang Kim took gold in the same event, flying around the track in a victory lap eyes smiling through her Tralyx sunglasses, secure in her Boost Pro aero helmet that lent her speed and protection during the race.

The competition was not without its ups and downs. Norwegian cross-country athlete Simen Hegstad Krueger overcame a crash at the opening gate to take gold in the men’s 30km skiathlon. The fall in the first 100 meters came when Krueger’s right ski slipped out from underneath him, taking him down into the snow with two more skiers piling up behind him. The fall resulted in a broken pole, and after swapping out for a new one, Krueger climbed doggedly for the next 29 km, working his way methodically back from last place. Halfway through the race he had worked his way up to 14th place and on an ascent with 8km remaining, he climbed determinedly past the competition, to work his way up to 5th. With 5km left, Krueger had worked his way all the back into first place, digging deep and screaming through curves, to cruise across the finish line 8 seconds ahead of the chase pack. Directly after Krueger’s come-from-behind win, he swapped out his Red Fluo Tralyx for a Gold Velvet frame, to match the medal hanging around his neck.
In all, Rudy Project celebrated the achievements of 65 athletes from over 15 countries, including the entire Polish biathlon team, the Estonian combined Nordic team, and Italian cross country star Frederico Pellegrino.

“We have a record-setting team this year,” said Chris Lupo, Sponsorship Director for North America. “We cannot wait to see what our athletes bring to the world stage in another four years.