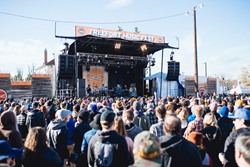 Treefort Music Fest (March 21-25, 2018), an annual arts and culture festival in Boise, Idaho, is bringing over 450 rising and renowned musicians to more than 20 venues in downtown Boise. Treefort will also host a diverse lineup of creators, chefs, artists and innovators at nine forts that reflect growing communities in Boise, like yoga, food, beer, tech, film, literary arts, comedy and skateboarding.

At Alefort, more than 30 breweries and cideries will be pouring their best, fresh selections. New this year, four breweries will create a beer using only Idaho ingredients. Alefort is free and open to anyone over age 21.

Comedyfort has a knee-slapping lineup this year, including Gina Yashere who is the new British Correspondent on The Daily Show, Solomon Georgio, who recently premiered on Comedy Central Stand Up Presents, and more.

Hackfort is a digital humanities conference that aims to bring those passionate about tech together to trade ideas and experiences. This year, hear Robin Finck discuss how to write music for video games, write your own level of Assassin’s Creed Origins with Ann Lemay and Ceri Young, talk UFO technologies with Alejandro Rojas and Marc Dantonio, and much more.

Kidfort ensures Treefort is for everyone -- even the tiniest festival-goer. Kidfort creates kid-approved events throughout the fest and helps filter the best things for young people to experience during Treefort.

Yogafort is the place to recharge and re-fort-ify. Three days of yoga, meditation, dance and music with local, regional and international yogis and musicians like Dave Stringer and Kate Swarm.

The full schedule of events, tickets and more information can be found at http://www.treefortmusicfest.com. Stay in the loop with all things Treefort on the mobile app, Facebook, Instagram, Twitter and Snapchat.

About Treefort Music Fest
Conceived as an extension of the current momentum in the Boise music scene and art scene at large, our vision is that Treefort will provide the opportunity for Boise to play host to the national and regional music scenes while showcasing the local up-and-coming talent. Treefort Music Fest is proudly recognized as the Cultural Ambassador for the City of Boise 2015-2017 and is a certified B-Corporation.